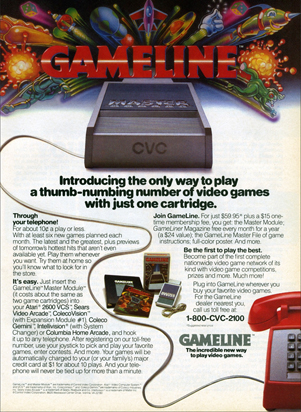 As X-Band modems and cable channels begin to allow SNES and Genesis owners to download video games "on call," it's an appropriate moment to take a look back at the first brief experiment with downloaded game delivery - in 1983, with the venerable Atari VCS leading the way, as usual.  The name of the service?  GameLine.

I first heard of the GameLine in a feature article in the June 1983 issue of Electronic Games.  Introduced to gamers as "The Greatest Thing To Happen To Video Games Since The Joystick," GameLine was the brainchild of Bill Von Meister, founder of GameLine parent Control Video Corporation and a designer for one of the earliest online services, The Source. 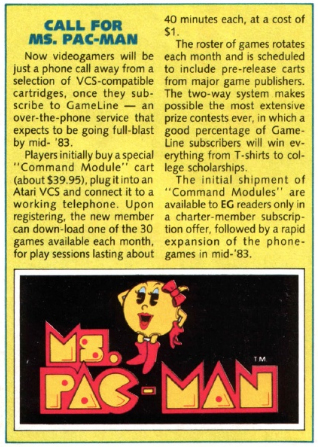 News blurb from the March 1983 issue of Electronic Games, page 10. 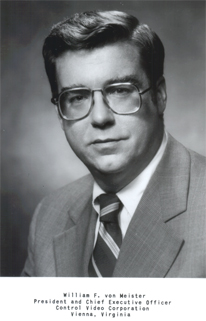 The Electronic Games report stated that GameLine was itself the remnants of the Home Music Store, a planned service which would have provided music to cable companies via satellite.  When audio retailers mounted a campaign that discouraged major record companies from allowing their products onto the service, Home Music Store was scrapped, and Von Meister was left looking for a way to use his newly-developed sophisticated data transmission technology.

But before we leave Home Music Store completely behind, we should credit Von Meister for his forward thinking: "cable radio" is now a standard service offered by major cable companies, over satellite, just as he envisioned.

So Von Meister's newly-acquired data transmission expertise was coupled with a then-cutting-edge 1200 baud modem, and GameLine was born.  GameLine would provide Atari VCS games via phone lines from a central computer in Vienna VA, charging a fee per download.  The downloaded games would cease to function in a few plays, requiring the player to re-connect and download again.

The eventual aim was to expand the services offered, with games being only a small part of the comprehensive scope.  Two additional services were nearly ready to go online when GameLine ceased active operation.  Those services were StockLine (quotes, commodity prices, and portfolios) and SportsLine (scores and more, from local to national).

Eventually, the GameLine would have encompassed a wide range of services, including:

Sound ambitious?  Well, believe it or not, all of this actually came to pass, though not exactly as planned.  I'll save that for later in this article...

Electronic Games readers were permitted to enroll in the service as charter members, at a slightly cheaper price than the usual cost of $49.95 (which included one year's service).  I did not enroll immediately, but instead entered a drawing in which a few lucky entrants received complete GameLine setups.  I was one of the lucky entrants, though I never did find out just how many people won, or whether my unit was more a promotional giveaway than a prize. 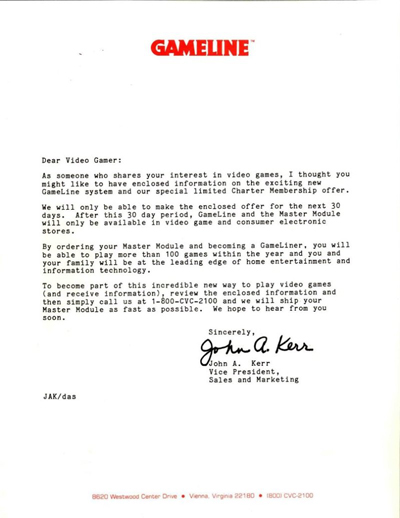 Not looking this gift horse in the mouth, I was intrigued by the materials I received.  The complete setup consisted of a GameLine Master Module, manual, telephone cable, introductory poster, membership card, sign-up agreement, premiere issue of Gameliner magazine, and a very attractive binder containing summarized rules for all available games. 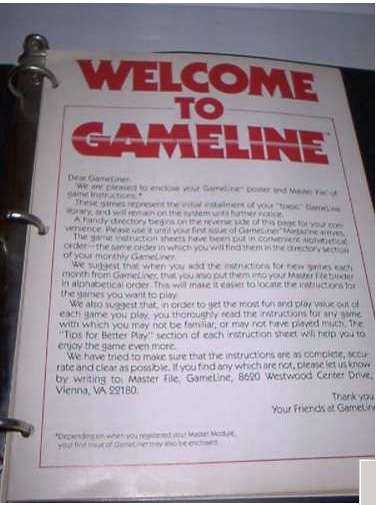 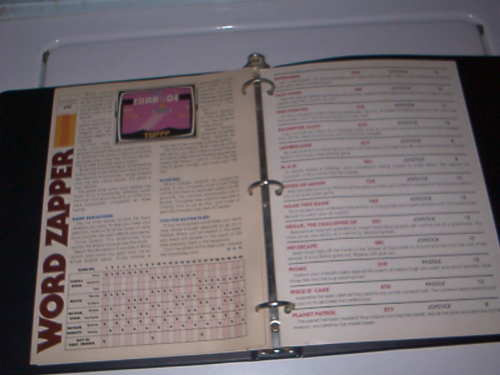 The GameLine Master Module itself was a silvery gray box considerably larger than even a Starpath Supercharger.  It measured 1 1/3 by 4 2/3 by 9 1/2 inches.  Its smaller end, which plugged into the 2600's cartridge slot, was long enough to accommodate emulators such as Coleco Expansion Module #1.  The user plugged a standard modular phone cord into the side of the GameLine unit, and plugged the other end into the wall.

I quickly hooked up the unit, read the sign-up agreement, pulled out a credit card, and called to enroll.  Unbeknownst to players who signed up for the service, it was to their advantage to obtain a personal identification number (PIN) for every member of their family, even if some family members had no interest in playing games.  Each member of the family received unlimited free play on their birthday.  I took advantage of this twice, once on my birthday in 1984, and later that year on my wife's birthday.  Sensing that the GameLine was about to breathe its last, I videotaped short segments of every game I could download until the 9V battery that powered the unit finally gave out.  I made it through the letter "P," or about two-thirds of the game library.

Unfortunately, I was not successful in videotaping a segment of the most unusual game to grace the GameLine, Steve Beck's Save The Whales.  What was so different about this game other than its unfamiliar title?  Well, it was never released in cartridge form.  It was available only from the GameLine (Ed: It was also listed in their Master Menu catalog) but following the demise of the service, it remained 'lost' until 2002 when 2 prototypes were found in the possession of Electronic Games magazine co-founder Arnie Katz.

One benefit for subscribing to GameLine was the members-only publication Gameliner, which provided information on new games recently added to the service, playing tips, questions and answers, and background articles.  The magazine was a glossy publication whose print quality and layout rivaled any mainstream periodical.  Unfortunately, this initial format lasted only two issues.  A later supplement featured typewritten instructions for the last set of games, but included none of the glossy magazine's enjoyable extras.

The first issue of Gameliner had a history of video games, and according to GameLine, the earliest years of video games could be summed up as:

To be fair, the article did go on to give proper credit for other developments (like Space Invaders), and was in fact pretty comprehensive; it was just amusing to see them place themselves so prominently in the history of electronic entertainment, since the article obviously had to be written before service started.

The two issues of Gameliner featured interviews with game designers whose titles could be sampled online.  Intended to be a monthly recurring feature of the publication, it is certainly a shame that only two issues, and thus, two interviews, were published.  The first issue's interview subject was Dennis Koble of Imagic, whose titles included Atlantis and Shootin' Gallery, and the second issue spotlighted Irwin Gaines of CommaVid, whose games included Mines of Minos and the excellent (and exceedingly rare) Cakewalk.

Another feature of the service would be player contests, announced in the magazine, in which players would compete for top scores on two titles per month, using identical game selection and difficulty settings.  Players would be awarded prizes based on top scores achieved in their geographic region (the U. S. was divided into 20 such regions) and nationally.  The first two titles chosen for competition were Imagic's Demon Attack and CommaVid's Cakewalk.

The GameLine unit was capable of both tone and pulse dialing, and it had a sophisticated method for trying several ways to reach the central CVC computer.  Once connected, it remembered how to reconnect later.  This was a very well-designed, easy to use system for such a complex process.

Once connected, the player entered one of the valid PINs assigned to the family, and selected the desired game using a three-digit code.  CVC's scheme had enough potential code slots to accommodate nearly 1000 games in its library, and, coincidentally, that is almost exactly the number of different Atari VCS cartridges now known to exist.

The final number, 999, was reserved for a special "browse" menu, through which a player could search for new games not yet announced in the magazine, free of connect-time charges.  By the second issue of the magazine, the system operators were already warning that the system was getting bogged down with too many "999" calls, and that the browse menu was in danger of being removed.  It's hard to imagine players having a great deal of fun going through lists of game titles, but I guess those were simpler times and we were all more easily amused.

Once a game was selected, the central computer would download the game to your unit, and you would be able to play the game.  The onscreen loading process consisted of vertical bands of color progressing from the edges of the screens toward the center, very similar to the Supercharger loading sequence.  The player would be permitted to play the downloaded game until $1.00 of credit was used up, and this would be typically 8 plays for most arcade-style games.  Once the credit was used, the unit would thank you politely and the game would no longer function.  If you had done particularly well on a game which was the subject of a player contest, you would be permitted to enter the contest for a small processing fee.

And what games were available on the GameLine?  No X-rated games were accessible via GameLine, whose focus was family-oriented play.  The companies present included many third-party publishers, the largest of which was Imagic.  However, there were some crucial omissions.  Since GameLine was unable to sign Atari, Activision, Coleco, Matttel, and Parker Brothers, many of the industry's biggest hits never appeared on GameLine. 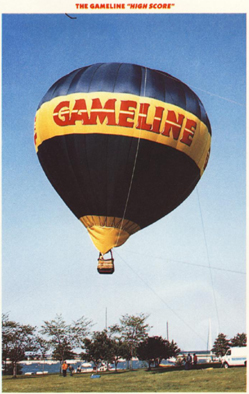 The management of GameLine knew that this was a real problem, and, in the second issue of Gameliner magazine, they asked readers to write the presidents of Atari, Activision, Mattel, and Parker Brothers.  In case the reader did not have the name of these companies' presidents or their mailing addresses, Gameliner thoughtfully provided them.

The missing publishers may have hastened the system's downfall, since many of the publishers whose products were available on GameLine were also the first companies to fail when the Great Crash hit (Ed: At least 3 of the major publishers were working on similar distribution services of their own.  See this article for more information).  How could a player justify paying $1.00 for eight plays of a game, when that same cartridge might be selling at the local toy store for $2.99?

A tiny hint of possible trouble came in the second issue of Gameliner, which trumpeted the wonderful new GameLine (hot air) balloon, named the "High Score," which would carry the message of GameLine to the skies.  Unfortunately, this wonderful balloon provided nothing to the service's customers, and this all seemed uncomfortably reminiscent of Games By Apollo's balloon, which was a similarly-misplaced allocation of funds.

But even beyond the bad timing and missing publishers, the individual games were simply not deep enough to sustain the kind of rental market that later developed for Nintendo cartridges and now is such a staple of the video game industry.  So perhaps the newer delivery services have a chance to succeed where GameLine did not, since new games are designed to take longer to complete, and cartridge prices have held steadier on these systems.  The possibility of multi-player games, with many players in different cities competing directly against each other, is an additional lure that these new systems offer.

And what was the ultimate fate of GameLine, this initial foray into downloaded video game entertainment?  When the VCS faded as the nation's most popular electronic toy, GameLine finally provided those long-promised extra services when it became one of the most successful electronic subscription providers.  You may have heard of them: they're now called America Online. 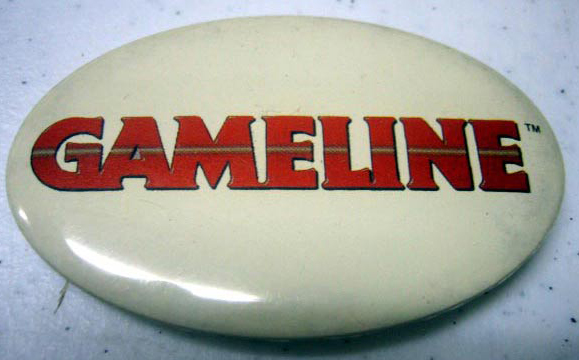 More tech info can be found on the Stella Archive.

Also check out Jimmy Maher's blog about the history of Control Video Corporation.

Games available on the GameLine: