One of the most impossible games to find for the Atari 2600 is the appropriately titled The Impossible Game from Telesys.  Much debate has been made on the subject whether the game exists at all.  It does, or at least it did at one time.  It was displayed at the 1982/83 Winter CES and I actually played it.  When representatives from Telesys gave me review copies of forthcoming games, I asked them if I could have a copy of The Impossible Game because I liked it so much.  "Sorry," they said.  That game was targeted only for the Far East, so there wasn't any point in giving a copy to an American journalist (for the record, the review games I was given were Ram It! and Stargunner).

Recently, while writing an article about Ralph Baer for Games magazine, I came across a hand-held game that Ralph designed which was probably the inspiration for The Impossible Game.  Now you all know who Ralph Baer is of course (I know you all read Phoenix!).  Well, in case that shameless plug went over your head, Ralph Baer is the person who invented videogames (Ed.:  Nope.  Willy Higinbotham did with Tennis For Two).  Besides inventing the Magnavox Odyssey, Baer also designed a slew of videogames and hand-held games such as the Coleco KidVid, the Coleco Telstar Arcade, and Milton Bradley's acclaimed Simon.  The first electronic game that he designed was an obscure hand-held from Coleco called Amaze-A-Tron. 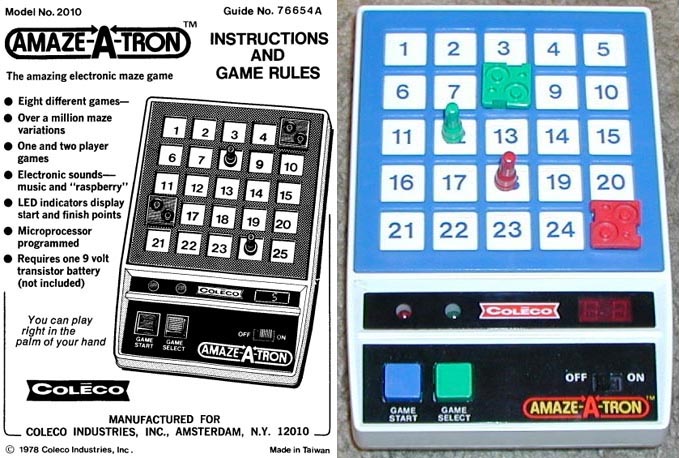 Amaze-A-Tron was a rectangular unit with 25 numbered squares on its face and a built-in TI TMS-100 microprocessor.  The computer randomly determined a path from one square to another which the player(s) had to figure out.  The unit informed the player the starting and ending square numbers via an LED (light-emitting diode) display.  It was then up to the player to find the correct route.  This was accomplished by moving a piece to a square adjoining the one that the player’s marker was already at.  If the move was correct, the computer would respond with a pleasant tone.  If the move was wrong then the computer let the player know by sounding an annoying buzz.  In two-player games, each player attempted to reach the finish line before his opponent.  In some variations, players had to return to the starting square whenever they took a wrong turn.  It is this last variation that we're most interested in.

Although not credited as such, The Impossible Game was a video version of Amaze-A-Tron.  However, where the hand-held unit consisted of a grid of 25 squares, the video version contained 36 squares.  In order to win, the player had to get through six levels - each progressively harder than the one before it.  In the first level, players only had to figure out the maze one square at a time.  By the time they reached the sixth level, players had to figure out the maze six squares at a time.  One wrong move and the player was sent back to the beginning.  Impossible?  Probably not if you had lots of luck and time on your hands.  A better title would have been "The Improbable Game".

The best part is that unlike The Impossible Game, Amaze-A-Tron is readily available through auctions and flea markets!

From an interview with Alex Leavens in the Aug/Sept. 1983 issue of Video Games Player magazine:

From a former Telesys employee:

Scott Stilphen discovered a Boing! prototype cart with a homemade label (with the name Soap Suds) was originally a Stargunner-labeled cart.  The cart was first reused for The Impossible Game!  A small label with the title exists underneath the Soap Suds label, and on top of the Stargunner label. 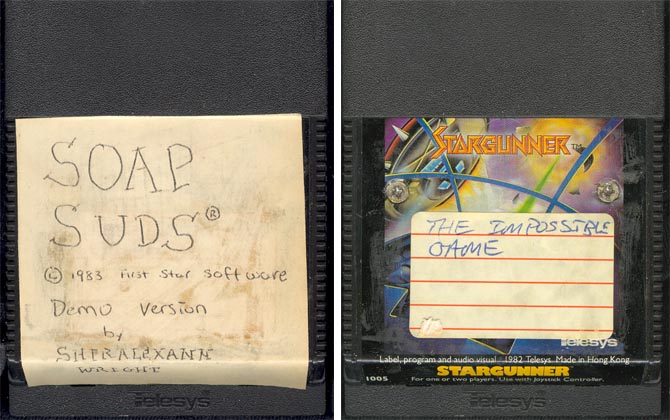