Patrolling the Skies with Sky Patrol 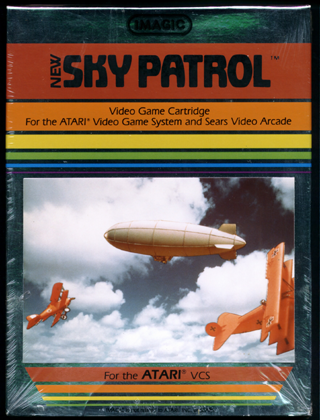 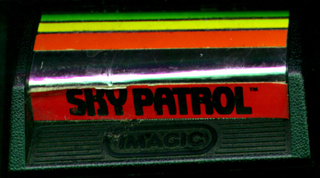 The game was inspired by designer Brad Stewart’s experience with helping a hot air balloon’s ground crew, while he was in college, and was planned to be a race between two balloons (with a 2-player option). Although the artwork depicts WWI-era biplanes/triplanes, none were planned.

The playing area is 2 screens high and 27 screens wide.

RED indicates height(?) of burner flame
GREEN indicates how much fuel you have
BLUE – unknown. Perhaps meant for damage or distance.

If you run out of fuel, you can still activate the burner.

Base/launch(?) – you start the game here. There is one screen to the left, and 25 to the right.

Balloon – you start one cloud level up directly over your base

Clouds – each level has a different wind speed and direction (left or right).  Faster winds blow at higher altitudes. The sky has 9 levels of clouds/wind currents. 5 are visible at the start. 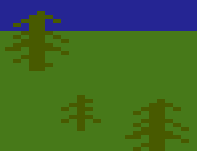 Trees – all 3 parallax-scrolling levels worth

Tanks – presumably meant to be a hazard for players to avoid. They currently cannot fire and remain stationary, although the treads show otherwise.

Anti-aircraft (aka "ack-ack") guns – another hazard, meant to force players to ascend.

Currently they are constantly firing, although they cannot hit you. You won’t see their fire until you are at least 3 cloud levels high.

They are currently 'active', as evident by the activity in the windows.

If the ground isn’t visible you won’t earn any points. Also, you only earn points when objects scroll into view - if you drop down from a higher level and an object is visible, you won’t get any points for it until you let it scroll off the screen and reappear.

Going left:
One tree worth 10 points. Beyond this tree are only more trees that aren’t worth any points.

beyond this tree are only more trees that aren't worth any points.

In looking through the code, I found there are some unused graphics that appear to be meant for Sky Patrol (that don't appear during the game): 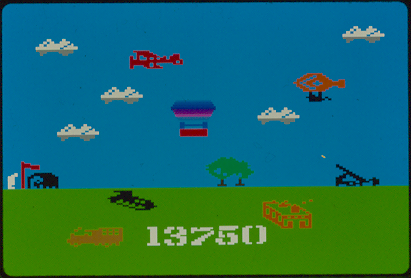 This is a rendering done by Imagic artist Michael Becker showing what the game was to have looked like.  If you notice, many of the objects shown here (hangar, tank, factory, ack-ack gun) are in the game.  The biplane and enemy dirigible/Zeppelin weren't yet implemented.  It's also possible the right set of "storm clouds" (above) are actually parts of the enemy dirigible.

Also notice the train graphic to the left of the score counter.  It's the same train that appears in Im

agic's Shootin' Gallery game (shown at left)!  What's even more strange is that ALL of the graphics from Shootin' Gallery are in the code (everything from byte offset $0af0 to $0fee is the same in both games)!  Brad doesn't recall why this was, but it's possible he used parts of Shootin' Gallery when starting on Sky Patrol.  Other programmers have done this, in an effort to save bytes and help cut down on development time.

Below are screen shots from the PBS show, Enterprise, which showcased Imagic in one of their episodes (click on photos for larger pictures).  Near the end of the show, there is footage showing programmer Brad Stewart and Imagic president Bill Grubb discussing some ideas for the game (including storm clouds) while riding in a hot air balloon!

Here's my interview with Brad Stewart.