Although his name or photo might not immediately come to mind, those of us who grew up in the 80s very likely knew of him. Corky starred on a popular show at the time (which featured a house with its own arcade) as well as in a commercial for a video game.

Q: How did you get into acting?

Corky Pigeon: I started tap dancing and singing at the age of 8. I entered a talent pageant when I was 10 and one of the judges was an agent. The agent sent me on an audition for one of the lead roles in a horror flick called “The Forest”. I got the role. I then changed agents to Harry Gold and soon after to The Kelman Agency who eventually got me the audition for Silver Spoons.

Q: Classic gamers recall the show being memorable for Ricky Shroder's in-home arcade.  I know I would have found myself playing them whenever the cameras weren’t rolling :)  Was that the case with you, Ricky, and Alfonso?

Corky Pigeon: Absolutely, the crew would leave the games open so we could play as long as we wanted. I mastered Gorf, got really good at Tempest and was able to kill the dragon in Dragon's Lair.

Q: How did you get the part to star in Imagic's Comic Ark commercial?

Corky Pigeon: I went on the audition, had a call back, and got the commercial! 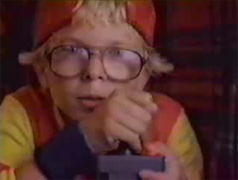 Q: Do you recall any details from the shoot?  Did you get to meet anyone from Imagic, such as Cosmic Ark designer Rob Fulop?

Corky Pigeon: I just remember it being cold when I got there and loving the catering. I also got introduced to bagels and cream cheese with lox, but nobody from Imagic.

Q: You did several commercials early in your acting career.  Were there any other video game-related ones?

Corky Pigeon: No other video game related ones, but I was a Hot Wheel kid with Jason Hervey in 1983 and did a slue of toy commercials for Mattel.

Q: Did the Imagic ad lead to your role in Silver Spoons?

Corky Pigeon: I don’t believe so, but you never know where a producer or director finds its talent.

Q: How was it working with the other actors on the show?  Any stories or memorable experiences?

Corky Pigeon: I remember one day me Rick and Jason were playing tag on the Universal lot and we would set off Todd Bridges' car alarm and back then you would have to turn it off manually close to the car. He would come out of rehearsal hunt us down and give us noogies :)

Q: Do you still play video games (and if so, which systems/games)?

Corky Pigeon: I own a Playstation 2, and play it every so often.

Q: I noticed from your IMDB page that you're also a musician. What do you think of popular music games such as Guitar Hero or Rock Band?

Corky Pigeon: I think those games are great! Especially with all the violent games that are circulating within our youth now. It's kind of refreshing. My wife recently bought Guitar Hero and I find myself getting addicted.

For more information on Corky's career, check out his IMDB page

He can be reached at: Pop2smash@aol.com