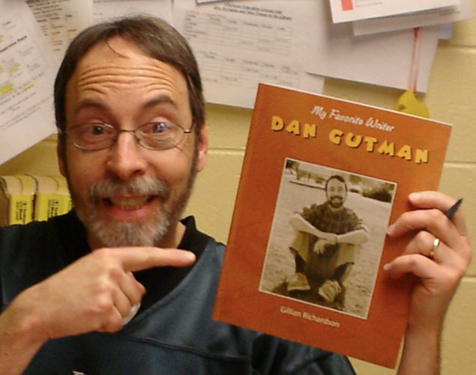 The creator of Video Games Player magazine and author of the book, Greatest Games, The: The 93 Best Computer Games of All Time stops by to talk about his experiences in starting up a video game magazine in the 1980s.

Dan Gutman: Writing always came naturally to me, but it never occurred to me to pursue it as a career until after college.  I always admired funny writers, like Robert Benchley, Art Buchwald, Dave Barry, and Woody Allen.  I'm not ashamed to admit that the publications that inspired me were Mad Magazine and National Lampoon.

Dan Gutman: I have a B.A. in psychology from Rutgers University, class of 1977.  I went to graduate school at Rutgers for two years, but left to try my hand at writing.

Q: You mentioned getting your professional start in the business by writing about, shall we say, the "blue" side of entertainment.  There must be some interesting stories related to that…

Dan Gutman: The truth is that my first job was with a girlie magazine.  In 1980 I moved to New York (where all starving writers go) and got a part time job at Stag Magazine.  Go ahead and laugh!  I learned how to write copy, captions, cover lines, and how to put together a magazine.  It was a great experience. 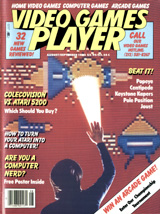 Q: You also wrote articles for Antic.  How did the opportunity to create Video Games Player with Carnegie Publications come about?

Dan Gutman:: The publisher of Stag, Chip Goodman, was starting to publish some "legitimate" magazines.  I didn't want to make a career out of skin mags, and the video game phenomenon was exploding.  So I approached Chip with the idea of doing a video game magazine.  I worked on it in my spare time while I was still at Stag.

Q: How hard was it to establish a magazine at the height of the “golden era” of video games in 1983, in a field where nearly a dozen different magazines were being published?

Dan Gutman: The competition wasn't the problem.  The problem was that my publisher (Chip) went into it in a very half-hearted fashion.  He was only willing to put out one issue at the beginning, to test the waters.  When that issue was successful, he agreed to do it bi-monthly.  But as soon as the sales faltered, he changed the name to Computer Games, and when that failed, he killed it off entirely.  He just never got completely behind the magazine.

Q: After Video Games Player/Computer Games ended, did you ever think about starting another magazine on the subject of video games?

Dan Gutman: No, but I did work for another one.  After my first issue of Video Games Player, the company that put out Video Review started a new magazine called Electronic Fun.  They offered me a job there, and I took it.  Then, while I was there, Chip called to lure me back and do Video Games Player as a bi-monthly.

Q: Between Video Games Player/Computer Games and 1995, were you involved with any other publications?

Dan Gutman: From 1984-1990, I wrote a syndicated newspaper column about computers, which appeared in some major papers such as the Miami Herald and The Philadelphia Inquirer, and I was a freelance writer for magazines like Family Computing.  I also did some humor stuff for Cracked Magazine, which was a competitor of Mad. 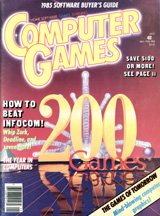 Q: Since 1995, you’ve authored dozens of children’s books.  What motivated you to pursue that direction with your writing?

Dan Gutman: After Computer Games folded in 1985, I tried my hand at magazine writing and non-fiction books.  I published two computer books and a couple of books about baseball, but none of them were particularly successful.  My son Sam was born in 1990, and I started reading a lot of children's books with him.  And to be honest, I didn't think they were very good.  I thought I could do a better job.  And as soon as I started writing for kids, I felt, "This is what I'm good at!"  I stopped writing for adults entirely and switched over to writing for kids.

Q: What were some of your experiences working in the video game industry with Video Games Player?  Do you have any stories or anecdotes from those days that you relate for us?

Dan Gutman: It was a very exciting time for me.  I was young (26 when Video Games Player started), living in New York City, and I was on the ground floor of a brand new medium - video games.  I remember going to The Consumer Electronics Shows in Chicago and Las Vegas, and rubbing elbows with people who were creating all these games and creating this cool new industry.  But the best part was that the art director of Video Games Player convinced me that we needed to hire an illustrator to draw the game screens (rather than photographing them).  He hired a young woman to do those illustrations.  I met her at Times Square and took her to Playland to show her what I needed for her to draw.  And to make a long story short, I married her!  Nina and I have been together for 27 years now.

Q: Electronic Fun featured a "gossip" page, near the back of each issue.  For the first 2 issues (in 1982), it was called "Random Access" and was unsigned.  Starting in 1983 it was called "Top Secret" and was signed by "The Fly".  The last 2 issues were under a different name (Computer Fun) and the column was now called "Random Access" again, but this time it was signed by "Qwerty".  Do you know who wrote them?  My best guess is that it's either Richard Ekstract (the Editor-in-Chief) or Randi Hacker (Senior Editor/Managing Editor), as both of them were with the magazine during its entire run.

Dan Gutman: I honestly don't remember.  It wasn't Ekstract, I know that.  He was "just" the publisher.  It may have been me, but it may have been Randi.

Q: The last issue of Computer Games mentioned a book by yourself and Shay Addams coming out that February to be published by Simon & Schuster and titled, "From Archon to Zork, The World's All-Time Greatest Computer Games".  I just did a quick search online and didn't see any trace of it.  Do you recall what happened with it?

Dan Gutman: Simon & Schuster bailed on the book, so we submitted it to Compute Books and they published it in 1985 under a different title: "The Greatest Games: The 93 Best Computer Games of All Time".

Q: Can you describe your career, between then and now, and where you’re currently working?

Dan Gutman: Since the magazine folded, I have been a full-time freelance writer, and loving it!  I started out writing three non-fiction baseball books for kids, then came out with my first novel in 1995.  I had a pretty successful novel with "The Kid Who Ran For President" in 1996, and the next year started a series of 11 books about a kid who has the power to travel through time using a baseball card as a time machine (Honus & Me, Jackie & Me, Babe & Me, etc.).  In 2004 I started a series for younger kids called "My Weird School."  There are 34 books now, and the series recently passed four million copies sold.  I've written 98 books, but rather than bore you by telling you all about them, readers can go to my website to check them out.

Dan Gutman: I saved one copy of each issue I worked on.

Q: Do you still follow or play video games?  If so, which of your titles are your favorite, and what types of games in general?  What’s your preferred platform for gaming?

Dan Gutman: To be honest, I don't.  I played a bit back in the "old days," but I really got into the field for career reasons rather than for the love of it.  Maybe that's why it didn't last for me.  We have a PlayStation 2 at home, but I never play it.  The only games I really enjoyed were simple shoot 'em ups, like Robotron and Tempest and a few puzzle games like Q*Bert.  The adventure games, and complicated games in which you have to use multiple buttons always bored or confused me.  I do like word games, though, and I AM addicted to one game on the iTouch - Wurdle.

Q: What are your thoughts on how the video game industry has evolved?

Dan Gutman: I can't really comment on the industry, because I have had no contact with it for many years.  But the games themselves have become spectacular!  When I think back to the primitive games we were writing about back in the early 80s and look at what they're coming out with today, it's just a remarkable transformation.  But I don't know that much about them.  I have other fish to fry.

You can download a copy of Dan's "VCS Graphics" articles from the May 1983 August 1983 issues of Antic magazine HERE.