Q: 1) To start, if you could be so kind, please introduce yourself for the benefit of our readers.

Dan Hunter: My name is Dan Hunter and I’ve been making games for 20 years now.  I got my start back in the mid-90’s on the Atari Jaguar, using nothing more than an Amiga 500 and a copy of Deluxe Paint 3.  Since then, I’ve worked for, among others, Lionhead Studios and Digital Extremes on games such as The Movies, Dark Sector, Bioshock 2, and The Darkness II. 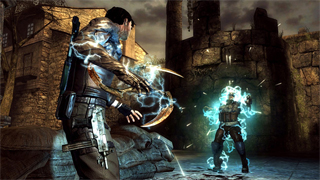 Q: I’d first like to personally thank you for your work on Dark Sector (1st PS3 game I ever bought), Bioshock 2, Halo 4, and The Darkness II.  Yourself and others delivered stunning results :-)

I'd like to start by asking about not only your personal role on Atari Jaguar's Attack Of The Mutant Penguins, but also some wider aspects related to it.  In particular, what sort of sense there was from within Atari UK itself regarding the Jaguar, at the period in time you started on the game and the team involved hopes and feelings toward how the game would do at retail?

Dan Hunter: My role was junior artist.  I was responsible for the fuzzy, blue things you chased and picked up in the game.  It was my first time in the games industry, so I was having a blast.  I’d made it!  I can’t go into much detail about that time, as my memory isn’t what it used to be.  Also, I wasn’t there very long at all, and I was so new to the game, so I didn’t really pay much attention at all to the business goings on.  I’ve no idea what the feeling within Atari UK was.  Like I say, I wasn’t even close to knowing how that part worked, and they certainly weren’t going to discuss that with a spotty teenager like me.

I do remember a certain pressure to deliver, though.  On my first day, I was shown the game and told of its importance to Atari.  It was hard for me to grasp that aspect at the time, especially from a nondescript office on a Leeds industrial estate.

I ask about these aspects, as the game itself was announced at a time Darryl Still was hyping it up somew

hat, as being 1 of the very 1st fruits as it were, to ripen from the newly-formed European side of software development for the ailing Jaguar and AOTMP was going to be THE game worth waiting for, almost the Jaguar's Lemmings as it were - something radically unique to the time and the hardware and the sort of title the Jaguar so badly needed.

Q: Were you/the team aware the Jaguar was on its last legs, about to be buried beneath the hype machines in full effect from Sony and Sega for the Playstation and Saturn?  Did you feel the public and press alike would really understand the nature of the game?  It seems to be THE marmite game among gamers and reviewers alike; they either like it or loathe it, it seems.

Dan Hunter: I didn’t understand the game!  Maybe at the start of the game that awareness wasn’t there.  The machine was new and interesting(ish), so it’s exciting to work on something you previously couldn’t do.  But as you say, Sony was on the horizon.  It’s easy now to forget how much of a leap forward the Playstation was.  The Saturn showed that Sega wasn’t prepared, either.  But you couldn’t really hide the fact that the Jaguar was pretty much doomed to fail.  It just wasn’t a big enough step forward, and the whole marketing behind it was a bit of a shambles too.

Q: Any thoughts on the Jaguar hardware itself, and did the team have any proposed future Jaguar titles?

Dan Hunter: No machine with a controller that ugly deserves to be anywhere other than in a landfill.

Naturally, I think the team was hoping it lead to other things - not sure if it involved the Jaguar or not.  I remember the main artist there, Dan Cartwright, working on some 3-D rendered stuff.  There was a lot of talk around that because games like Unirally and Donkey Kong Country had used Silicon Graphics machines or something similar to create the sprites.  I think the main thought was how can we be a part of that.

Q: Moving onto the Playstation 2 next, let's start with the very promising Titanium Angels.  From the 40% complete video I’ve seen on YouTube, this had the potential to be a decent 3rd-person action-adventure game.  The footage reminded me somewhat of Bioware's MDK II, which I loved on the Dreamcast.  What can you tell us about the game itself and what became of it? 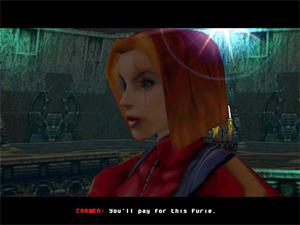 Dan Hunter: So yeah, the game was meant to be a 3rd-person action-adventure game.  The idea was you played a heroine named Carmen and you had this walking tank/mech that you hopped on occasionally.  Graphically, I think it was something really fresh.  Some of those early levels (the ones in the YouTube videos) are cool.

40% complete is a good way to sum up the whole thing.  Nothing ever really got finished.  Levels were made, but no gameplay was implemented.  A physics programmer was hired to work on Titan (the tank), but so much time was spent making this complete physics engine; in the end ,nothing came from it.  Unfortunately, so much time was spent on that type of thing - the core of any game - the gameplay kind of got forgotten about.

The game suffered greatly from feature creep.  The initial concept was quite simple, but over time it slowly evolved into various things and games.  There were many shifts in focus, but the big one that stands out for me was after the Metal Gear Solid 2 trailer dropped.  After that, Titanium Angels changed into a stealth game.  So, what started out as simple 3rd-person shooter warped into something totally different.  It all ended quite abruptly.  The publisher I think just got tired of the broken promises, delays, and lack of any real game, so they pulled the plug.  We all got called into the meeting room one morning and told development had ended.  We spent the afternoon in the pub.

Q: Talking of canned games, Necroscope, previewed in Edge for PS2 and Xbox, described as a cocktail of Jedi mind tricks and sophisticated espionage.  This was to be Mobius Entertainment's 1st crack at a survival-horror title.  From the 4 screens shown, the game engine looked superb, very much inspired by Silent Hill, but it didn't appear the gameplay was as far along as the visuals at this point (Dec'2002).  The game was set for a Q4 2003 release, so again, any insights as to what became of it would be fantastic.

Dan Hunter: Necroscope suffered similar issues to Titanium Angels.  You’re correct in that the game was to be a survival-horror game set in late 70’s - early 80’s London.  Think Silent Hill mixed with the TV show The Professionals.  I loved the concept and setting.  I spent a huge amount of time “researching” - watching box sets of The Professionals, The Sweeny, and films like Who Dares Wins (The Final Option in the U.S.).  I’d say that actually the gameplay was further along than Titanium Angels ever was.  Unfortunately, the same pattern emerged; the play style changed over time.  Where at one point there was to be little to no gun play or violence, with the vibe firmly set on exploration and playing detective, it slowing changed into shooting and snapping necks from behind cover.  For me that was a real shame, because I think it had the potential to be something different.  There weren’t many people doing a spin on the horror genre, especially something set in the 70’s-80’s (this was pre-Vice City).  I still think about what it could have been, and I’m a little bummed to think it never happened.

The other issue was that it was being developed without a publisher, so therefore wasn’t bringing in any money.  Other games were, so naturally that was the focus; Sound of Thunder was one, but the main one was Max Payne.  Mobius was tasked with doing the GameBoy Advance version.  As people may know, after that Rockstar bought Mobius Entertainment and renamed it Rockstar Leeds, I had left during the development of Necroscope and before the Rockstar buy out, so I can’t give the precise reason for its cancellation, but it’s clear to me that a small horror game set in 70’s London based on a series of books isn’t part of Rockstar’s bigger plans. 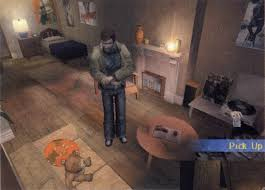 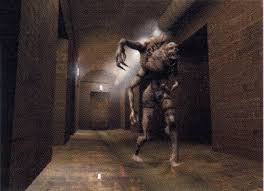 Q: The bog standard question is next.  Have you ever done any coding on the Atari Panther, Konix Multisystem, or any unreleased platforms?  Any other lost/canned titles (any format) you've worked on you can talk us through?

Dan Hunter: I have not.  I’ve been quite lucky I think.  Most of the projects I’ve worked on have seen the light of day, so the games mentioned above are the only ones never released.

Q: What can we find you doing these days, and what plans for the future?  Do you perhaps feel home VR will be the next bus to catch as it were, or another old concept, dragged up and doomed to fail?

Dan Hunter: These days I can be found in Canada.  I’ve been here for almost a decade.  I’m currently lead artist on Prismata, a strategy game taking elements from Starcraft, Magic the Gathering, and chess.

I also spend a little time on my own projects - nothing serious, just something to entertain myself.

I’ve mixed thoughts on home VR.  Interestingly, for Christmas my partner got me one of those Google cardboard VR kits.  That was the first time I’d tried out this new wave of VR.  It’s actually quite ace.  I’m still a skeptic when it comes to its success, though.  You really do look like a massive tit swinging your head around wildly while having this huge, black box strapped to your skull.  It’s hard for me to get past that.