Fernando Alvarez: Computer Science major at UCB.  DataSoft was my second real job out of school.

Q: What inspired you to get into game programming?

Fernando Alvarez: I was a 6502 programmer and DataSoft was hiring (in Milpitas of all places!).  Game development sounded fun, but I was not a game aficionado by any means.  I was just as happy building a word processor or spreadsheet application.

Q: How did you come to work for DataSoft?  Was DataSoft the first (only?) game company you worked for?

Fernando Alvarez: I had previously done some contract work for a company in Albany (the name escapes me) - an Apple II port of some mummy game that was never published.  I think DataSoft hired me because I could demo the work I’d done on the mummy game as an example of my ability to program video display and joystick for gaming.

After DataSoft, I never did games again.  Gary Furr, who previously wrote the specs for AtariWriter while at Atari, was the manager of the Milpitas office who hired me. 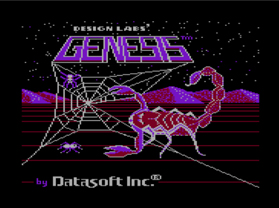 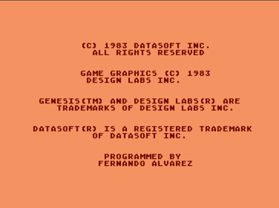 Q: Can you talk about the port of Design Labs’ Genesis arcade game that you did for the Atari 8-bit computers?  Did anyone else help (graphics artists, musicians, etc)?

Fernando Alvarez: I did both the graphics and sound effects.  If I remember correctly Whitley (don’t remember if that’s his first or last name, we just called him that) did the box art; on later games he also did some of the graphics. 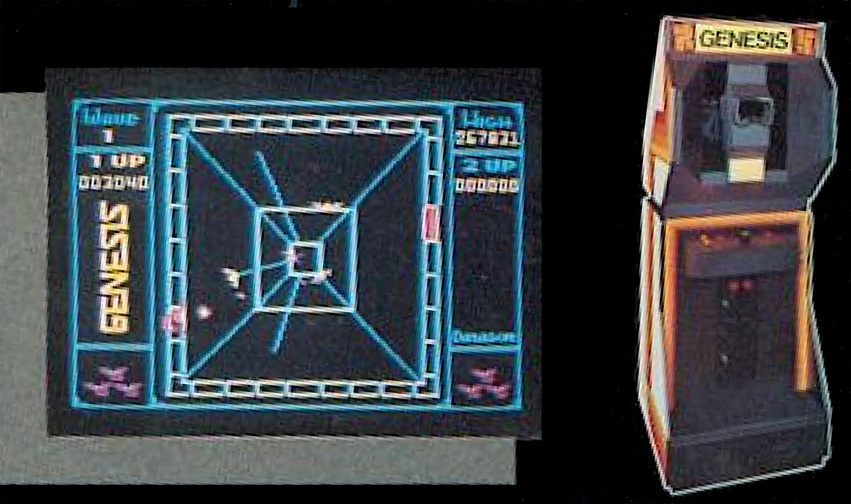 Q: Very little information exists about either the arcade game or the company behind it, Design Labs.  I’ve heard the arcade game was similar to Atari's Tempest, and that it possibly used a joystick.  What do you recall about it?

Fernando Alvarez: We had the arcade game of course; it was in a room where we kept the other arcade games we were working on.  I don’t remember the game play at all.  Mostly we just took the concept and the graphics from the arcade games as inspiration.  The bar was pretty low back then.  As long as it resembled the arcade game your ‘port’ was good enough!

Q: I know Kevin Furry did the Apple II and Commodore 64 versions.  Besides those, ports were also done for the IBM PC and Atari VCS/2600.  Were you involved with any of those?

Fernando Alvarez: Just the Atari 8-bit port.  I seem to recall that at some point both myself and Kevin were working on porting the same game.  They were both 6502 and the differences were mainly just in the video display handling and the keyboard / joystick interrupts.  Kevin also did the IBM PC version.  I don’t remember now who did the rest. 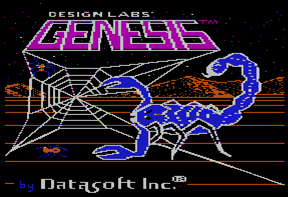 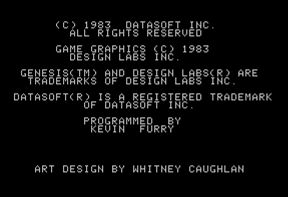 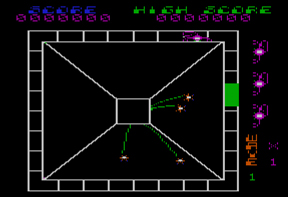 Q: Did you program any other games, either for DataSoft or another company?

Fernando Alvarez: I did some work on Banjo the Woodpile Cat and Pooyan.  I had previously done an Atari to Apple II port of a game that was never published while under contract to another company.

Q: Do you recall what systems these were for?

Fernando Alvarez: No, I have no recollection.

Q: The Atari 8-bit version of Pooyan is credited to Scott Spanburg and Kelly Day, and the Apple II version is credited to Chris Eisnavgle.  Are any of those names familiar to you?

Fernando Alvarez: I don't remember those names; they were probably in the L.A. office.

Q: Was Banjo released?  I can't seem to find any information about it.

Fernando Alvarez: I don't know what happened with Banjo, but I would not be surprised if it never got anywhere.  If I remember correctly, there was no real game play designed, just a concept and some graphics.  I was not central to either Banjo or Pooyan.  My involvement was at more of a "play with this and see what you think" stage rather than real game development.

Q: Did you include any “Easter eggs” in your game(s)?

Fernando Alvarez: No, but I used to know several in AtariWriter.  My colleague Dave did the printer drivers and he kept coming across them in the code, which was a problem since in those days you had to use complex keystroke combinations to put in such basic stuff as bold text.  He kept having to take out weird code (like speaker beeping funeral dirge) that conflicted with the SHIFT+TAB+P or whatever combo he wanted.

Q: Do you have any earlier versions (prototypes) of your game(s)?

Fernando Alvarez: No, at some point I sold my Apple II and tossed all the media.  I was young - who knew anyone would ever care?

Q: Are you still in contact with any former co-workers that you worked with?

Fernando Alvarez: No, I lost track of everyone.

Q: Any memorable stories or anecdotes from those days?

Fernando Alvarez: We had a lot of fun when we went to the L.A. office for a costume party on a boat.  The theme was “River boat’s a coming!” so we were all done up as river boat gamblers and Tom Sawyer characters.

Fernando Alvarez: It would be Genesis, I guess, since that’s the only game I did on my own.  The programming I did for Banjo the Woodpile Cat and Pooyan was forgettable, since I’ve forgotten all but the names.  My favorite program at DataSoft wasn’t actually a game.  It was a combination word processor, database, and spreadsheet; in a word (or rather two) it was Lotus 1-2-3 almost a year before that came out.  Unfortunately the project was killed before I’d gotten too far.  What could have been!

Fernando Alvarez: I’m overwhelmed, not so much at what the games can do – that’s just technology advancing. What strikes me the most is the size of the industry and the money involved.