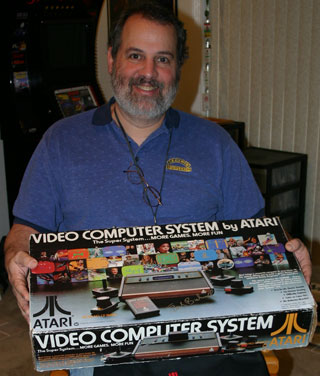 One of the few people that really need no introduction.  As one of Atari's original "Imagineers", he helped design the Atari VCS/2600 (and wrote the color-cycling code that was used in most of the games), as well as the 400/800 SIO interface.  He went on to help develop the Amiga computer and later worked on the USB architecture that we all commonly use today.  The adjective "brilliant" comes to mind.  Plus he's a helluva nice guy.

Q: You graduated from UC Berkeley with a BS and MS in EECS, correct?

Joe Decuir: Yes.  The BS was a pre-med minor; the MS was in biomedical engineering.

Q: What inspired you to pursue a career in hardware design?

Joe Decuir: I was fascinated with computers late in high school, after I lost interest in designing cars (I was a kid from LA).  I was good at electronics hardware design in school.  I learned some from my father, who was a Berkeley EE grad from 1948.

Q: Did you work for anyone prior to Atari (after school)?

Joe Decuir: My first two jobs were on medical instrumentation and in medical research in a hospital.

Q: How did you hear about the position at Atari?  When did you start working there?

Joe Decuir: I heard of the position at Atari through a colleague Ed DeWath, who was a pal of Ron Milner at Atari's think tank in Grass Valley CA. 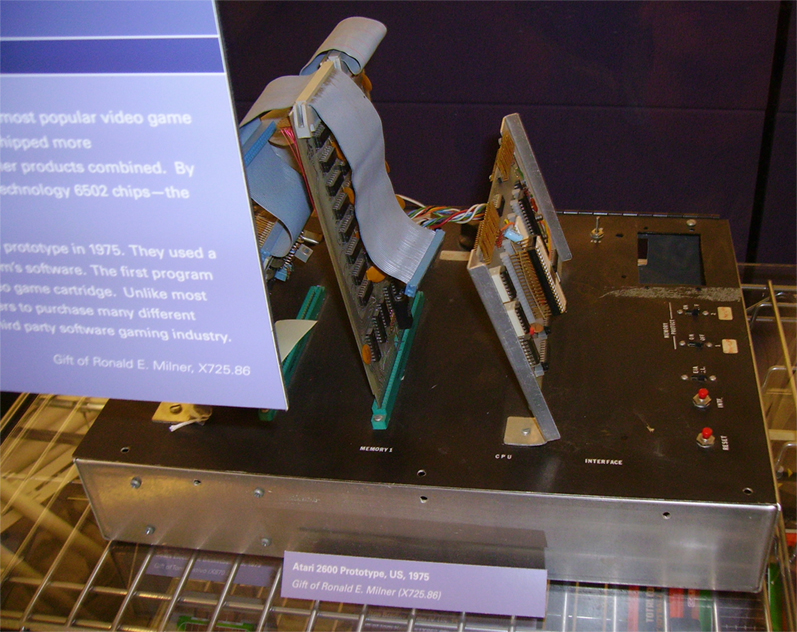 An early incarnation of the VCS, dated 1975.  Ron Milner of Cyan Engineering later donated this to the Computer History Museum in Mountain View, CA.

A later incarnation of the VCS, complete with joysticks from a Tank coin-op.  Al Alcorn later donated this to the Computer History Museum.

Q: What was the development process of the VCS like?

Joe Decuir: Fun... really stimulating... a bit intense.  We had to be resourceful.  I would bicycle to work and back marveling that I was getting paid to do this.  It was so much fun I could imagine paying to do it.

Steve Mayer and Ron Milner conceived of the VCS, and designed the first prototype of its ancestor.  I was hired in December 1975 to move to Grass Valley CA and make it all work.  That included the display engine for what eventually became Combat (we called it Tank at the time.  Later we added little jets and little biplanes).

Q: It must have been exciting (and a proud moment) to not only help design the chipset for the VCS, but also write some of the first software (such as Combat and Video Olympics) for what ultimately became one of the most popular and successful video game systems to date!

Joe Decuir: It was great, but I have to tell you, it didn't feel special, and I don't deserve too much credit.  First of all, Ron Milner and Steve Mayer conceived of what became Combat; I was an implementer.  Second, I worked on it mostly as a test case for the hardware; the biggest contributions I made were figuring out how to add gates to make software work better, or to add code to allow hardware to be easier.  Larry Wagner, who hired most of the early VCS programmers (including the founders of Activision and Imagic), made the Combat display engine into a lot more fun.

I took Pong as someone else's game, implemented it on Stella as a test case, and then went off and invented a lot of variations to complete the cartridge.  Bob Brown allowed me to stop at 50 variations.

Q: You once mentioned that you had programmed a version of Atari's Super Bug coin-op for the 800, purely as a test concept.  Do you recall why it was never released?

Joe Decuir: I didn't stick around to finish it.  I started another company with two pals to work on modems and other communications products.

Q: Were there any other games or projects that you worked on that ultimately never got released or even finished?

Joe Decuir: Most memorable moment that is printable: It was November 1977.  The Atari 2600 had been in stores for a couple months.  It was Christmas shopping time at the Sears store in Mt. View, CA, the store closest to the Atari engineering offices.  I went to see how it was doing.  There was a huge crowd of kids milling around a unit set up to play Combat.  In wave after wave, families would bring their kids and drop them off while they went off to do other shopping.  The kids would stand around waiting their turn to try their had at the game.  In the process, they would learn the game, because the gameplay is not terribly complicated.  The lucky ones would get to play before their parents would come and drag them off.  I stood in awe.  After a couple years of work, this was the payoff.  All those kids were delighted to play our game.  250,000 units would sell in that first season, and most would be bundled with Combat or Video Olympics (the Sears-branded units).

Q: After leaving Atari, you went to work with Jay Miner at Amiga, designing the chipset for the Amiga computer.  What were some of the differences between the two companies, as far as the development process in regards to the various systems?

Joe Decuir: Big question.  Amiga was smaller and not as well-funded.  We tried to self-fund with Atari 2600 market products.  When that collapsed, so did Amiga's revenue.  That is why we had to sell chipset rights for coin-op use to Atari, and eventually sell out to Commodore.  OTOH, we were on our third system, and we were a seasoned team with better process (and, we still had Mitchie the dog for company).

Q: From what I've heard over the years, the Amiga nearly became the next Atari computer (instead of the ST), and when the deal fell through, Atari sued Amiga (New York Times article).  How did that whole situation evolve?

Joe Decuir: That is an entertaining rumor, but not correct.  It is precisely true that Amiga was starving for money, and Atari was falling apart, so Amiga licensed their chipset for use in coin-op games.  That agreement is public on the web.  Meantime, in 1984, several things happened:

• In spring 1984, Amiga was shopping itself to Commodore.

Then, many things happened at once:

• Warner broke Atari into two pieces.  They sold the coin-op side to Namco, and the consumer side to the Tramiel family for a $250M loan.  Jack evidently knew of the Amiga-Atari deal, and wanted to grab Amiga.

• Amiga sold to Commodore, and the chip license deal was cancelled.

• Tramiel turned around and sued Jay Miner personally for patent infringement and theft of trade secrets.  Since I had left Amiga, Jack didn't know I existed.  I kept it that way, since Commodore refused to indemnify me; I could have lost everything I had to pay lawyers.

Q: Can you describe your career since working at Amiga?  You went to Everex, Teledesign, and then MicroSoft? 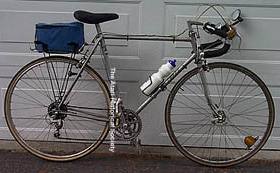 Q: In May(?) of 2002 you became a Senior Engineer at MCCI.  Are you currently still there?  What are (or were) some of your responsibilities?

Q: With any of the projects you were involved with (both hardware and software), were there any features you would like to have added, or any known bugs or glitches that gave you trouble (or never got resolved)?

Joe Decuir: This is a huge question.  There are things we wish we had put into the Stella (2600) system, particularly binary horizontal position comparators, more address pins on the processor and more pins on the cartridge slot (especially R/W, so we could put RAM there).  We wish we could have put Apple II-style hardware slots in the Atari 800, but FCC rules of that time prevented that.  I wish the Amiga had been made into a game console in 1984-1985 instead of a color MAC like machine in 1986, etc.

Q: Occasionally, programmers put little Easter eggs in some of their games that would reveal their name, or a message.  What was your opinion of these?  Have you ever left any in your code, or know of others who did?

Joe Decuir: I didn't leave any in myself.  I heard of some in some games.  There are Easter eggs in some versions of Windows that read out all the names of the contributors, and my name is in several of those.

Q: You mentioned you still own several VCS games.  Have you kept a copy of everything that you've worked on, either as a keepsake, or to show friends or family?

Joe Decuir: Yes, this is my portfolio.  I hope that if I have time and brains as an old retired guy, that I can try and write some of the games on the hardware that I designed, and use features, like scrolling in the Atari 800, or bit-blitting in the Amiga.

Q: What are your thoughts on how the video game industry has evolved?  Did you ever consider going back into that area of work (designing video game hardware)?

Joe Decuir: It might have been fun, but the industry collapsed in America in 1984, leaving the field to Nintendo in 1985.  Meantime, I had become very excited about computers as communications tools in 1979, and I told Kassar that in my Atari exit interview.  I was telling him about the French Minitel system, and about what could happen if that migrated onto what was then called the Arpanet (which became the internet).  I wanted the Amiga to succeed in that space, but Commodore did not see that.

Q: What might most people not know about you? (such as being a softball coach, playing in a band, etc.)

Joe Decuir: I was a scout leader for 12 years.  I am no longer a softball coach; she is in high school.  My band needs a new drummer.  I kayak and bicycle a lot, when I am not traveling.  I am the secretary of the IEEE Seattle Section, after chairing the Communications Society chapter for 9 years.  If I could wave a magic wand, I would have the PhD I started working on after Atari but didn't finish, so I could be a EECS professor. 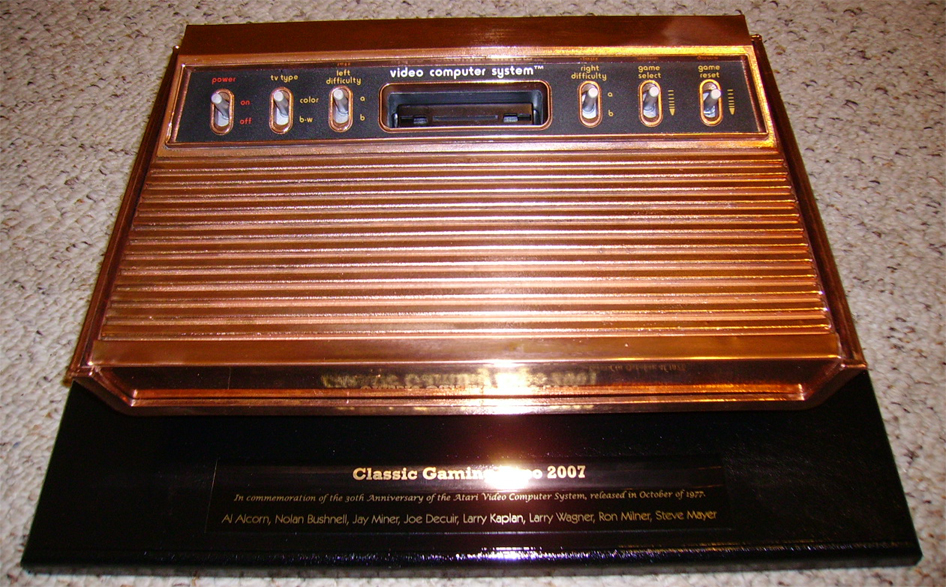 Special commemorative Atari VCS/2600 30th Anniversary award, made by Scott Stilphen.
This was presented at CGE 2007 to Al Alcorn on behalf of the Atari VCS design team.

To learn more about Joe Decuir's career, check out his bio at: http://www.careercornerstone.org/compsci/profiles/decuir.htm

How the Atari VCS/2600 got its internal name, "Stella": http://www.landley.net/history/mirror/atari/museum/stella.html