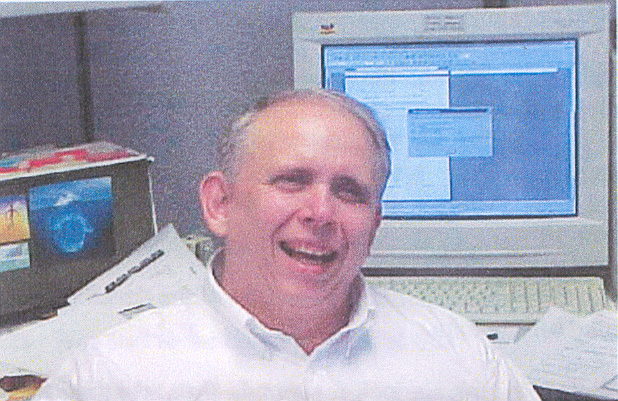 Larry was one of the last programmers to work at Games By Apollo.  His interview was also the last one to be printed in the 2600 Connection newsletter (issue #100).

Q: How did you get into game design as a career?

Larry Martin: I was finishing a consulting contract, and so was watching the newspaper want ads for employment opportunities.  For a couple of weeks I kept seeing an ad for Games By Apollo.  Since the position had not been filled, I called to see if there might be a chance to learn something about video game development.

Q: How did the interview go?  Did they hire you right away?  Who else was working there as game programmers at the time?

Larry Martin: It went well.  I was called back the next day and made an offer.  There were a number of programmers there already, and several more were added.  We added more offices in a building across the street for programmers.  It has been too long ago for me to remember everyone's name.  I can remember their faces better.  The lead programmer was a guy by the name of Ed Salvo, and his boss was Mike.  I can't remember Mike's last name (Ed: He probably means Mike Smith).  I guess I must be getting old.

Q: How did you end up writing Guardian?

Larry Martin: Games By Apollo had its developers propose game scenarios.  I first proposed a submarine game, which was rejected.

Q: Did you write any code for this at all?

Larry Martin: I started working on a prototype, but it was clear that it would take too much memory and nobody seemed to know what was really wanted.  Part of lack of requirements was that only the programmers really knew what was possible, so the Marketing guys would wait for something to critique.

During lunch, all of the developers would go to the mall to grab a bite and do research at the video game arcade.  It seemed to me that the games like Defender were popular.  The idea of having a force field protecting planets was similar to Breakout and was easy to implement in software.  Much of what was done was the result of experimentation to see what could be done with limited resources and still looked interesting.

Q: So a lot of the ideas you put in weren't thought of right away?  What kind of things were left out?

Larry Martin: The approach was to get some new feature to basically work, and then ask for opinions from others and then Marketing.  Everyone would say, "Yea, but can it do..." and the answer was no, there is not enough memory, but let me think about it and see what can be done.  I tried to come up with several alternatives instead of just "Yes" and "No" choices.  Generally, there was a compromise that led to a reasonably good choice.  The games with lots of variety of object motion held players' attention longer.  This led to animating the bombs dropped by the saucer, and continual requests from Marketing for more bomb types and unique sounds for each bomb type.  The request for levels of difficulty led to the game mode selection that encoded combinations of saucers randomly-changing directions, bombs bouncing or wrapping at screen edge, planet-seeking bombs, etc.  The guardian ship outside the force field could move side-to-side but not vertically.  Hitting the button on the paddle controller fired the guardian ship's laser that could destroy bombs dropped by the saucer.  The player accumulated varying points for each of the different bomb types.  The laser could not reach the saucer, since that would have eliminated the challenge.

As the game progresses, the variety of bomb types and the drop rate increases until it becomes a deluge.  Different bomb types also have different levels of challenge.  Some are smaller and harder to hit.  One type looks like it is rotating and the laser must hit it in the center.  One type looks like a baby saucer and when it is hit, the screen flashes with an explosion.  If a bomb reaches the guardian ship, the guardian is not destroyed but it is stunned momentarily, leaving the force field unguarded.  If a bomb reaches the force field, it knocks a chunk out of the force field.  The play begins with 3 planets that orbit, protected from the bombs by the force field.  If a planet is moving past when a bomb comes through an open section of the force field, there is a screen flash and explosion sound, and the planet disappears.  When the player loses their last planet, the value of the bombs destroyed is their score.

Q: Were there any particular challenges with writing Guardian that you had to overcome?

Larry Martin: The whole program was 4K of Assembly ROM code and 128 bytes of writable RAM memory.  In that space, instruction timing had to maintain vertical sync for the TV, and the colors had to be changed as the beam was scanning across the picture tube.  It was easier to use the joystick controller on the VCS, but I chose to use the paddle for more responsive control of the guardian ship.  This meant that each horizontal scan has to monitor the paddle controller for position change updates.  This left the vertical retrace interval available to do all calculations needed to enable changes in objects from screen draw to screen draw to animate game play.

One of the more-challenging aspects of the development was searching the code for byte sequences that could also be reused as sound effects data.

Q: Did you merely look for sounds and then take the data needed and look for the same bytes in the code, or did it force you to change sounds and/or code to make it work?

Larry Martin: Some of both.  One technique was to set up a loop that played all of the code space as sound data.  I would hit a button to capture the address where the interesting code was and then go back to the area to investigate.  By trial-and-error, I determined the 'start' and 'end' of the section of code that sounded interesting, and then examined the code for a pattern.  Sometimes adjustments could be made, but frequently not, since those bytes were program code which cannot be arbitrarily changed.  Heavy reuse of data made program debugging very frustrating at times.

Q: I can imagine so!  Did it go beyond sound too?

Larry Martin: There were many sleepless nights of debugging.  The lack of resources was very frustrating.

Q: Are there any "Easter eggs" in Guardian, like hidden initials, or strange features not normally available?

Larry Martin: No Easter eggs.  I was cutting corners just to get it all to fit in the memory.  I wish that I had enough memory for Easter eggs.  Maybe next time.

Q: Did you code anything else - released or not?

Larry Martin: Guardian is the only video game that I developed.  I developed a tool that helped in choosing color combinations, but it was never sold.

Q: Was it used at Apollo?  Just for VCS games?  What was it called?

Larry Martin: I used it at Apollo.  It was a VCS cartridge (one and only).  I just called it my color selection tool.

Q: I don't suppose it survived the old days?

Larry Martin: Sorry, but it did not survive.

Larry Martin: We worked long hours.  When the creditors moved in, I was working around-the-clock for several weeks, trying to finish Guardian.

Q: So was it just barely released then?  Were you afraid it never would be?

Larry Martin: There were private investigators parked with cameras, recording the comings and goings of everyone.  Somehow we figured out that they represented the investors.  The investors were waiting for some of the games in development to be finished before moving in and forcing Apollo into bankruptcy.  I was under a lot of pressure to finish debugging Guardian.  When I found a bug, I would ask for just a little more time, to make the game as good as I could. 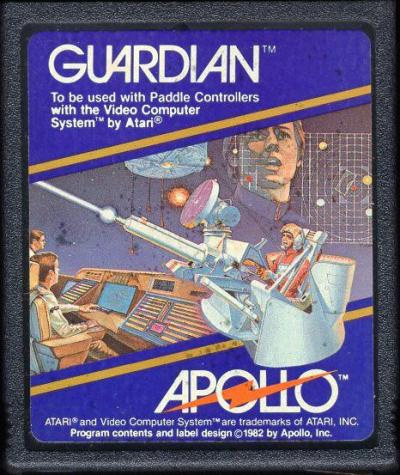 Q: How long before the "end" was this?

Larry Martin: Immediately after I declared Guardian finished and released it to manufacturing, the creditors moved in with court orders and shut the company down.  My recall is fuzzy about that time.  I had been running on very little sleep for weeks, but it seems like it was just a day or so.

Q: It seems odd that they wouldn't let a few sell at least, or maybe they tried to sell the games themselves?

Q: Apollo also tried to move into other systems, like the Atari computers.  Was that about the same time as this?

Larry Martin: Actually, the games were being developed using Atari computers, which also used the 6502 processor.  Special cables connected the Atari computer to a box containing RAM memory that we downloaded from the computer.  The other side of the box had another cable with a game cartridge on the end, which plugged into a VCS.  This cartridge emulator let us debug changes quicker than if we had burned EPROMS for each change.  I don't recall anyone developing games directly for the Atari computer.  I don't know, but some of the programmers may have done some of that development after the bankruptcy.

Q: Hmm, this (box) wasn't the READS 2600 device, was it?  As I recall, Ed Salvo sold these through VSS Inc, a company he started in Texas.  Was he making and selling these while at Apollo, or just started the design for it there?  I'm guessing at the very least, they (the box and the READS 2600) were related.

Larry Martin: I don't remember what it was called, but it did come from Ed Salvo.  I think VSS was the company Ed and Mike started immediately after Apollo.

Q: I've heard some interesting stories about the Apollo boss, Pat Roper.  For instance, I heard that he had a dream of commuters using mini-copters to get to work.  Things like that.  Got any to share?

Larry Martin: Not really.  I remember that it was fun and interesting.  The environment seemed to be a little extravagant in some ways, but I don't recall any particulars about any individuals.

Q: Are you still in the game business?

Larry Martin: No.  The consumers quickly became bored with what the technology was capable of at that time.  The VCS/2600 market collapsed shortly after I got into the business, so after Guardian, I found other work to pay the rent.  From the stories I've heard, those that have dedicated their lives to the video game business have done very well.  I followed Games By Apollo by returning to the development of telecommunication systems and networks.

Q: Do you regret that, or was it fairly natural to do after seeing the game market crash?

Larry Martin: It was an easy choice at the time, but now, looking at the success of those that stuck with it, sometimes I wonder what might have been.

Q: Have you ever considered doing a game on the side?  Maybe in Java?

Larry Martin: Yes, I actually thought about doing something like Guardian for the Palm Pilot or Handspring's Visor, although I have wondered what I might have been able to do then, if had the resources that are available in the current video game consoles, having quality sound, high-speed processors, and megabytes of RAM and CD-ROM for code.  Wow, do the "modern" video game designers really appreciate how good they have it?

Q: Actually, I've heard from programmers who've done both old games and modern games that they are equally difficult to do, just in different ways.

Larry Martin: Yes, I believe it.  There's just fewer creative limitations due to resources.  I'm glad to hear people still enjoy Guardian, even with its limits.