Q: Lee, it's my pleasure to be able to put a few questions to you.  Would you mind starting us off by introducing yourself to our readers?

Lee Actor: I started in the videogame industry in 1982 for a small startup named Videa, which became Sente Technologies and later

Bally Sente.  I worked mostly on designing and programming coin-operated arcade games such as Snake Pit, Hat Trick, Street Football, and others.  In 1988 Bally decided they didn't need a design team in California, and Dennis Koble and I started an independent 3rd-party development company called Sterling Silver Software, which a few years later became Polygames.  We created the PGA Tour Golf franchise for Electronic Arts (the original PC version and 4 versions for Sega Genesis), as well as numerous Atari coin-op ports to Genesis, Sonic Spinball for Sega, and other original titles.  In 1997, Dennis and I and our old colleague Roger Hector started an interactive game division of Universal Studios in San Jose called Universal Digital Arts, which produced the original title Xena for Sony Playstation.  After 3 years, Universal decided to just license their properties rather than develop products in-house, and I left the video game industry.  Since 2001 I have been a full-time composer, mostly of orchestral music; to date my works have been performed well over 100 times by almost 70 different orchestras and bands throughout the U.S. and around the world.

Q: I’d like to start by asking about some of your earliest coding (if you can recall that far back.  I appreciate it's been a good few years since), but didn’t you work on a couple of promising, but sadly unreleased games for the Atari 2600 console?  I'm thinking of Lasercade and Atom Smasher (AKA Meltdown).  Can you talk us through both and what became of them?

Lee Actor: I can remember that far back (barely), but I'll point out that my earliest coding was in 1968 for an IBM 1130 mainframe.  Lasercade and Meltdown were both produced at Videa, though I was only responsible for designing and programming Lasercade; Meltdown was the work of Dave Ross.  Both games were sold to Fox in late 1982/early 1983, just before the big video game crash, and I believe Lasercade was later resold again to Atari.  As far as I know, neither game ended up making it to store shelves, though I think they might be available through the Classic Gaming Expo.  The whole game fit on a 4K EPROM.

Q: Sticking with the Atari hardware, you also went on to develop various music software for the Atari 800 hardware (such as Advanced Music System I + II). What were your thoughts on the hardware POKEY sound chip?  I ask as over here in the UK, it's very much a respected chip, especially as it's very versatile and great for sound FX, but other than folks wishing Atari had included it on a lot more 7800 games, it seems to come in a respectable second after the mighty SID chip in the Commodore 64.

Lee Actor: Music software actually provided the path for my entrance into the video game industry.  I had developed Advanced Music System on the Atari 800 the summer before I entered the PhD program in Music Composition at UC Berkeley; it started as a personal tool for me to play with, as I found the existing music software for the 800 appallingly bad.  It ended up turning into an award-winning commercial product, through which I met Ed Rotberg (of Battlezone fame), who had recently left Atari with Howard Delman and Roger Hector to start Videa.  Ed offered me a job, and though I wasn't looking at the time, decided a few months later to take a leave of absence from my graduate studies and see what working in the fledgling game industry was like.  My leave of absence is now in its 34th year. 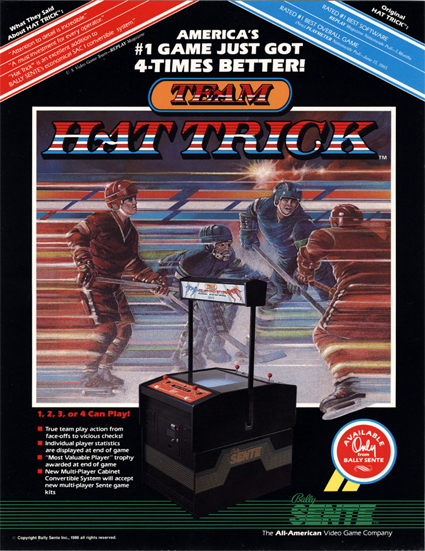 As for the POKEY chip, the one great advantage it had over the SID chip, if I remember correctly, is that it had 4 voices available rather than 3.  The sound was certainly inferior - basically an annoying square wave - and it was not possible for every note to be in tune, but that extra voice makes a huge difference when it comes to music.  In Advanced Music System, I even jury-rigged a way to do multi-tracking; I made a 16-voice POKEY version of a Rachmaninoff piano concerto.  I'm sure that would sound very painful nowadays.

Q: Back onto the subject of lost games, I also believe you worked on a few coin-op projects that sadly never made it (Team Hat Trick and an unnamed, 3rd-person spaceship game).  Anything you can tell us about either would be fantastic, and also how did you feel seeing the fruits of your labor sadly consigned to the scrap heap?  If nothing else, at least people asking questions about them means they might be gone but not forgotten.

Lee Actor: Team Hat Trick was probably the best coin-op game I did.  It was a tabletop configuration for 4 gamers (2 players + goalie for each side), and though any of the players could be computer-controlled, with 4 humans it was just outrageously fun.  For many months, a group of 4 of us would play for at least an hour every day in the hallway, disrupting everyone else's work in the office, I’m sure.  It tested off the charts in Canada and I believe did very well everywhere, but never made it to production.  I think it had a lot to do with being large, heavy, and expensive.  It's the coin-op game of mine I most wish I had a copy of.

The 3rd-person spaceship game - actually, I think it was a 1st-person perspective - was one of the projects started when Bally Sente got rid of much of the staff, and signed contracts with several of us as independent developers.  This game was to be an expanded version of Jez San's Starglider, but frankly I didn't get very far on it before Bally decided to buy out our contracts.  No tears shed by me.

Q: There was also talk of a Playstation 1 game, based on Universal Studios' classic monsters - a subject that's had mixed results over the years (an earlier Atari ST/CBM Amiga game based on them also never appeared), so I’d be delighted to hear what became of the PS1 game.

Lee Actor: The PS1 game was Xena: Princess Warrior, produced by Universal Digital Arts.  I really don't know how well it sold; it got mixed reviews and had some problems, but there were definitely fun elements in it as well.  Electronic Arts thought enough of it to want to do a sequel, and when Universal closed down the office, I had the team and everything needed to produce a successful product except the cooperation of Universal.  After the 2 most stressful months of my life, I finally threw in the towel.  Probably for the best; I always far-preferred creating products than managing other people who created them.  The Atari ST/Amiga project you mentioned doesn't ring any bells.

Q: Moving onto perhaps your best-known platform, the Sega Genesis (Mega Drive here in UK), you were 1 of the few to attempt the "insanity" as it were of attempting to do 3-D polygon games on hardware designed for 2-D, sprite-based games, long before the days of Sega bringing out the SVP (DSP) chip for Virtua Racing, so I wonder how on earth you pulled it off and how pleased you were with the results.

Lee Actor: ) Insanity is probably a pretty accurate term.  Doing 3-D on Genesis required many programming/optimization tricks - something that 2600 programmer like Dennis and myself had lots of experience doing (the processor in the 2600 didn't even have a hardware multiply instruction).  The end result was fine for doing a camera flyover of the course in PGA Tour Golf, but for action games like Steel Talons and Hard Drivin', the frame rate was pretty choppy, but basically the best you could do on that hardware.

Q: I've heard of Electronic Arts using the Sega Mega Drive's Z80 CPU as well as the 68000 for games like F-22, LHX Interceptor, and Blockout, whereas UK coder's like Archer Maclean simply used clever coding routines for his snooker game, so I wonder which camp you fell into?

Lee Actor: We left the Z80 for audio as designed, and stuck to clever coding techniques.

Q: Would developing on the Sega CD instead have been helpful?  It has a faster CPU to start with, and the option to use the Genesis' 68000 in tandem...

Lee Actor: Maybe, but I think it would have been a messier development environment.  I prefer the straight-ahead approach, looking for every last drop of optimization from the hardware.  Throwing a mechanical device into the mix makes me nervous.

Q: Looking at the games themselves (Steel Talons, Hard Drivin', and Race Drivin') do you feel they were (technical issues aside) ideal for home conversion?  I ask as while the Atari Lynx has a technically-fantastic version of Hard Drivin', it cannot disguise the original's limited gameplay, and after having done everything there is to do, boredom sets in.  Plus, when you add in technical restraints, you suddenly find something like Steel Talons gets very frustrating as the frame rate isn’t what you'd want, because the hardware simply is not up to it.

Lee Actor: Probably not ideal choices for home conversion, if just for the lack of custom controls like a steering wheel, etc.  And the framerates (esp. Steel Talons) do indeed suck. 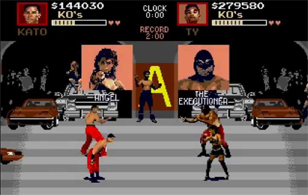 Q: Sticking with your 2-D Genesis games, I’d like to ask how you approached Pit-Fighter, which had massive sprites and very impressive scaling in the coin-op, but a lot more custom hardware than could be found on the Genesis, and RoadBlasters, which while being one of the better home versions (NES, ST, and Amiga versions disappointed many), lacked speech.  Compromises obviously had to be made from the start, but how did the teams involved decide what to keep and what to cut?

Lee Actor: As half the team that decided what stayed and what had to go, I can only say that we tried to include as much as was technically feasible.  I don't remember the details, but I think these kinds of decisions were fairly obvious and easy to make.

Q: The Genesis version of Pit-Fighter turned out far better than the SNES version, let alone the Master system version, and as for the 7800 version, that was canned.  Am I right in thinking there was at least talk of a sequel exclusive to Genesis; if true, whatever became of Pit-Fighter 2?

Lee Actor: We did the Genesis version of Pit-Fighter 2, though I'm not sure it ever reached production.  That was 20+ years ago.

Q: I believe you're now retired from the coding side of games industry, so could you tell us what your up to now and if you miss the coding days?

Lee Actor: I "retired" in 2001 and made music the center of my life once again.  I've been composing and conducting since then, and have produced 4 commercial CDs of my work.

I do miss the coding days, the camaraderie, and technical problem solving; the money was damned good, too.  If the world of video game development hadn't changed drastically in the mid-90s, I'd still be sitting in my home office developing games with my programming partner and an occasional subcontractor for art and sound.  But I'm also quite happy sitting in my home office every day, writing music, which if anything is an even more isolated activity than programming.  It's thanks to video games that I get to do that now.