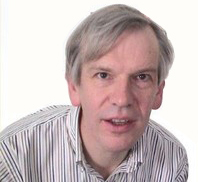 It is with the greatest of pleasures that I'm able to put a few questions to Mr. Peter Calver of Audiogenic Software Ltd. fame.  He's also the founder of Supersoft, and the founder and CEO of LostCousins.com.  Peter, if you wouldn't mind, would you please introduce yourself to our readers and give us a little background info on both yourself and Audiogenic.

Q: Audiogenic is, to so many people out there, associated with both its wide range of sports titles and were pioneers in many cases with these games.  How was it the company came to focus on the sports genre side of the market?   Was it something that just evolved over time, or was it intended from the early days of the company? 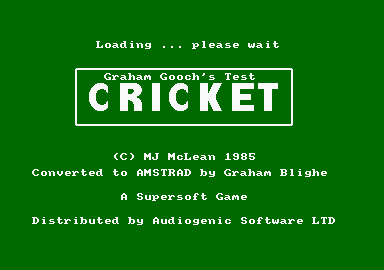 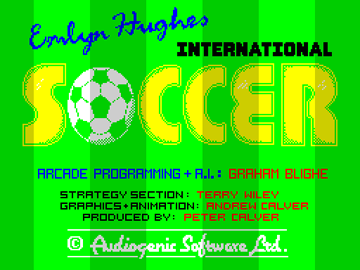 Peter Calver: The focus on sports simulations dates back before Audiogenic Software was founded in 1985; work started on Graham Gooch's Test Cricket in the spring of 1984 and it was originally going to be published by Supersoft, the company I founded in 1978.

Then, in 1985, my partner and I bought the assets of Audiogenic Limited, which was virtually bankrupt.  Since the Audiogenic name was better known amongst gamers, we decided that Audiogenic Software Limited, the new company we set up, should publish the cricket game.

It was so well-received that we continued with football (Emlyn Hughes International Soccer), rugby union (World Class Rugby), rugby league (Wembley Rugby League), and then more cricket and football games.  And there was Super Tennis Champs, which was really fun.

Q: I've read interviews with co-partners of yours over the years, and they've sung the praises of Audiogenic games to the high heavens, from Emlyn on the C-64 to Brian Lara and beyond.  The games might not always have boasted cutting-edge graphics and sound, but the company simply seemed to know what made a game great.  To this day, Exile constantly gets brought up as never having been beaten in its field, appearing in industry and causal gamers top-10 lists of greatest games of all time.  Looking back on the companies rich history, you must be proud of not only what you achieved, but how both the public and those that worked with you hold you in such respect.  Was it hard to build and maintain your 'standing' as it were?  I only ask, as I often hear how cut-throat the industry was and indeed still is, and often the media would love to jump on a story about company X not giving a damn, coder Y hating his/her time at.....etc.

Peter Calver: We put gameplay above graphics, and didn't release games unless we were happy with them, even though this sometimes meant missing release dates.

Q: Leading on from the above, I've always been curious as to the 'selection process', if that's the right word, of just how you decided which games to publish, other than the sports games - Exile, Wreckers, Helter Skelter (one of the most addictive games ever), Krusty's Super Funhouse, Impact, Exterminator (which I loved, yet it was your only coin-op license?), Bubble And Squeak, etc.  What aspects did you look for in a game?  Did a coders previous work or reputation help ,or was it simply a case of a game impressing you enough to sign it?  Also, going back to your only coin-op game, Exterminator, that seemed an odd choice.  Just how did that come about and why no more coin-op conversions?

Peter Calver: Again it was all about gameplay.  In the case of most of the games you mentioned, there was a playable demo very early on, and this made the decision to back them very easy.

As far as Exterminator was concerned, it was an unusual coin-op with a very different control system, so that made the challenge all the more interesting.  However, we lost a lot of money on the project, and so decided to stick to what we knew best. 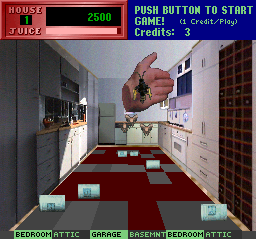 Q: How did Audiogenic decide which formats to support and why?  You were prolific on the BBC, C-64, ST, Amiga, etc.  You did a few CD32 titles, but I cannot think of any titles for Atari hardware (8-bit, 7800, Lynx, Panther, Jaguar).

Peter Calver: We were a bit too late for the early Atari machines; the market had moved on.

Q: I wondered about the Jaguar in particular, as you were quoted talking about it being far more powerful than its rivals (Mega CD, CD32, etc), but there was a danger of Atari just making Starfox clones (ala Cybermorph) and ignoring the need for simpler games, like sports games and platformers.

Peter Calver: When it came to the Jaguar - which was of great interest - it was Atari who rejected us, because they wanted blockbuster games.

Q: I believe Atari UK's PR Manager of the time once worked for Audiogenic, so I wondered if there remained any close ties between him and Audiogenic that could of lead to publishing deals.

Peter Calver: Darryl Still worked for Atari in the early days but moved on around 1987, however we remained in touch.

Q: Were you also ever looking at supporting the Konix Multisystem?

Peter Calver: No. It wasn't something we looked at, as far as I can recall.

Q: Regarding Loopz, it was initially designed for the Atari ST and then converted to several formats.  It was also licensed to Capcom for a coin-op version which unfortunately never appeared.  What can you recall of the Atari Lynx version?  It was never released by Atari.  Unfinished prototypes popped up later on, and Songbird Productions ended up finishing the game and releasing it.

Peter Calver: I think there were about 18 versions of Loopz for different computers, consoles, and arcade machines; the Lynx version was the last to be written, so far.  Although the coin-op was never released by Capcom, we did see a video of the prototype game and it inspired us to create Super Loopz for the SNES.

Did you know that we also developed a pub version of Loopz for Barcrest, who at the time were the market leaders (they produced the Tetris pub machine)?  Again it got to the prototype stage.  I still have a prototype machine in my shed, but it never made it into production.

Q: Atari seem to have either sat on or lost interest in so many promised games for its consoles over the years (XEGS Commando, 7800 Toki, Paperboy, etc).  Do you have any idea why they seemed 'cold' towards releasing the Lynx version?   Puzzle games like Chips Challenge and Crystal Mines are seen among some of the best games on the format, and Loopz seemed the perfect 'fit', so I've never understood what went down.

Peter Calver: I don't know why they never went through with it, but I think they may have had financial pressures.

Q: Talking of lost Audiogenic games, do you have any memories of Lone Wolf: Mirror Of Death on the ST, Amiga, and MSX?  All 3 versions were said to be arriving.  Did work ever start on any of them?

Peter Calver: Lone Wolf was one of those projects that simply didn't work out very well, so we had to cut our losses (and they were substantial). 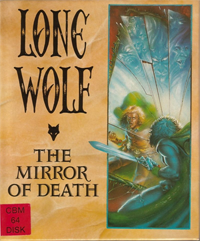 Lone Wolf: The Mirror of Death for the C-64

Q: Gary Partis' Daxis is something of a 'mythical BBC title' (LINK).  Is it true it was just that - a myth designed to generate 'press interest' and simply a game title that was dreamt up by both Gary and Darryl Still (as 1st part of the title uses Darryl's initials)?

Peter Calver: I don't think it ever existed.  If it did, I never saw it.

Q: Any other lost game info you could share would be most welcome.

Peter Calver: There was a Commodore 64 shoot-em-up called Hell for Leather (LINK) which never made it to market, and we put a lot of money into an Atari ST game called Cybex.  It was designed by Dean Lester, who later went on to great things at Sega and Microsoft, but this was the start of his career.  He was helping out in our office and learning game design from my project manager Nigel Alderton (the author of Chuckie Egg). As I recall, the project folded because the developers went bust.

Q: I seem to recall, way back in 1989, Audiogenic were making brave attempts to get more female gamers into the male-dominated world of video games by planning more 'cuddly' games, but also to develop more sports games using licensed female athletes.  How far along did this brave attempt get?

Peter Calver: I did sign up a young lady - she's probably a grandmother now - who played both cricket and football for England.  But around that time we had a lot of projects in development and simply couldn't take on any more.

We did publish Emlyn Hughes Arcade Quiz, which was a general knowledge quiz game modeled on pub quizzes, but with an arcade element; it wasn't exactly a game for girls, but it wasn't game for boys, either.  In fact it would still make a great pub game, but it was too far ahead of its time then (for the pubs, that is).

Q: Which were the most commercially-viable platforms in their generation for Audiogenic, in terms of the 8 and 16-bit eras?

Peter Calver: We always did best with Commodore versions, whether it was the 64 or the Amiga, but then I started with the Commodore PET in 1978.

Q: Regarding the issue of piracy, did you notice a drastic effect on sales, as piracy seemed rampant on ST/C64?  Was that a factor in a move towards consoles like the MD/CD32?

Peter Calver: Piracy was not really an issue for us. The people who played our games wanted to OWN them.

Q: Having left the industry, what aspects of the games industry do you miss, and which were you glad to see the back of?  What are you currently involved with?

Peter Calver: I left the industry because the stakes were becoming too high for a small publisher, and I certainly don't miss the sleepless nights wondering how to pay 30 peoples' salaries!  I do miss having so many imaginative people around me, though, and I certainly regret never producing the 1930s football game we designed after signing up Sir Stanley Matthews.

I've always been an ideas person, so when I left the games industry after 20 years, I continued dreaming up ideas - some of which I put into practice - but most of them are sitting in a file waiting for their time to come.  In the meantime, I'm running a website I devised for people who are researching their family tree,  There are almost 100,000 members, which keeps me busy.

Q: Are you surprised people like myself are seeking you out on behalf of the retro gaming community, and that people are still spending hours with your products from years ago?

Peter Calver: Not really.  I have quite a collection of old computers myself, although I don't suppose they work any more.  I did recently play one of my Commodore PET games from 1979, but it was on an emulator.