• BUG: Being an unfinished prototype, there’s no intermissions.  Also, when the game ends, your final score isn’t displayed anywhere.

• BUG: If you die while a prize is destroying a power pellet, it will remain on the screen and it can’t be eaten, thus making it impossible to advance.  It’s possible to glitch up to 4 power pellets on the first screen (there’s enough dots to trigger 4 prizes to appear).

• BUG: On later mazes, the flickering can be bad enough when all the monsters are on or near the same vertical height that you can pass right through a prize.  {Scott Stilphen}.

• BUG: Sometimes if you lose a life after clearing nearly all of the maze (and you have another reserve life left), you’ll advance to the mext level without having to clear the remaining dots.

• BUG: Pausing and unpausing the game may cause the monsters to jump to different positions. 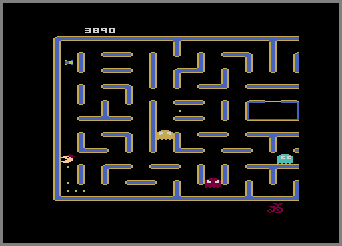