• The codes are part of a contest Sunrise Software was running called the Quintana Roo Treasure Chest.  According to this memo, "the contestant will use clues hidden inside the game to locate the treasure chest which is buried somewhere in the Yucatan peninsula.  In order to win the Quintana Roo scholarship the contestants must use their sleuth-like skills to tell us the exact location of buried chest."  The codes are actually Earth coordinates (latitude and longitude) which points to a city on the east coast of the Yucatán Peninsula in Mexico - Chetumal, the capital of the state of Quintana Roo.

• After you solve level 3, you’ll get a code that can’t be used - 37 W (see picture and video #1), after which the game will continue.  The meaning of this is unknown.  Perhaps the code was used to prove you beat the game?  The Colecovision version (which is believed to have been the first done, as the screenshots on every box closely resemble that version) has the same code as well, but in the C-64 version, the "W" is a graphic that appears to be a small representation of the cobra snake graphic that appears on the map vault!

• BUG: If you are poisoned while placing a rock in the map vault, the tune that normally plays will be stuck on a note that will play constantly (videos #2 and #3).  {Scott Stilphen}

• BUG: On 2-port models, the game powers up to a title screen with garbled text.  The issue is that the game reads an uninitialized memory location ($0C) and writes it to a graphics chip register (GTIA register PRIOR).  With the 4-port models, the initial power up state is a value (perhaps $00) which doesn't cause an issue when written to PRIOR.  With the 2-port models,it is a value which puts the graphics into GTIA mode 11 (80 pixels wide, 16 hues, 1 luminance), hence you can't read the text. 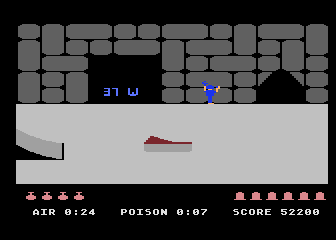