• EASTER EGG: Play a game up to at least level 23, after which select level 23 on the level select screen, and then hold the PAUSE button on the console while moving the joystick UP, DOWN, RIGHT, LEFT, UP, DOWN, RIGHT, and LEFT.  The message ‘FOOD FIGHT BY KEITH SAWYER THE “ALCHEMIST OF FUN”’ will appear (picture #1).  {Dan Boris}

• Replays are mainly triggered by having only a little time left on the cone (you can't leave the level in less then 12 seconds), and having a certain quantity of "close calls" with the chefs. There are also restrictions on which levels it can happen on and how often it can happen.  Replays can happen on levels 5-17, 100-499, 600 and up. Also, once you get a replay you have to wait for 5 more levels where you didn't leave the level early before you will get another replay.  {Dan Borris}

• It’s possible (albeit rarely) to earn an extra life from the instant replay feature.  If you die on a level and then finish it completely and get an instant replay, it will replay the level the first time around when you die, but then when the replay gets to your death, the message "Almost Made It!" flashes on the screen and you’ll get a free life!  This happens with the original arcade game as well.  {Joey Kay}

• BUG: Garbage graphics appear in the upper-left corner of the screen (pictures #2 and #3).  This usually isn’t visible on most TVs.

• FRYING: On rare occasions, it’s also possible to reveal the hidden message, or at least part of it, by this method. 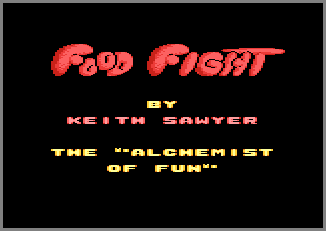