• 2 versions exist – a 16K and a 32K. The 32K version has more terrain and a radar, but it lacks the hidden message found in the 16K version (described below).

• HIDDEN MESSAGE: (16K version only) - At the title screen, type “strappy”.  The message, “WELCOME MASTER GOOD TO SEE YOU” will appear on the screen (picture #1).  {Frantisek Houra}

• BUG: Once the hidden message is triggered, pushing any direction on the joystick will show the starting point of the game with the terrain flashing black-and-white and the rest of the colors cycling (picture #2). Pushing in any direction again will start the game, but there won’t be any collision-detection with either your missiles or bombs. When you lose your fighter, the screen will be back at the starting point, but there’s no way to start the game again. If you press START, you’ll see your fighter on the title screen, but with the sounds effects from an active game playing. There’s no other way past this screen, and eventually you’ll lose all of your fighters whether or not you crash into any of the letters.  {Frantisek Houra}

• BUG: Due to the game’s poor collision-detection, it’s possible to knock out the vulnerable section of a wall when it’s below the surface (picture #4), which results in trapping your fighter.  {Scott Stilphen}

• BUG: In both the 16K and 32K versions, you can place the fighter below the playing area (pictures #5 and #6).  In the 16K version, there are 2 areas in the game where you can enter down in the area just before the “AIRSTRIKE II 16K” text and safely stay there until the next possible chance to move back up, thereby allowing you to bypass some sections.  This isn’t possible in the 32K version because you’ll interact with part of the radar display.  {Scott Stilphen}

• BUG: In the 32K version, there’s an area where if you crash, the game will place your replacement fighter so close to the terrain that you’ll immediately die.  {Scott Stilphen} 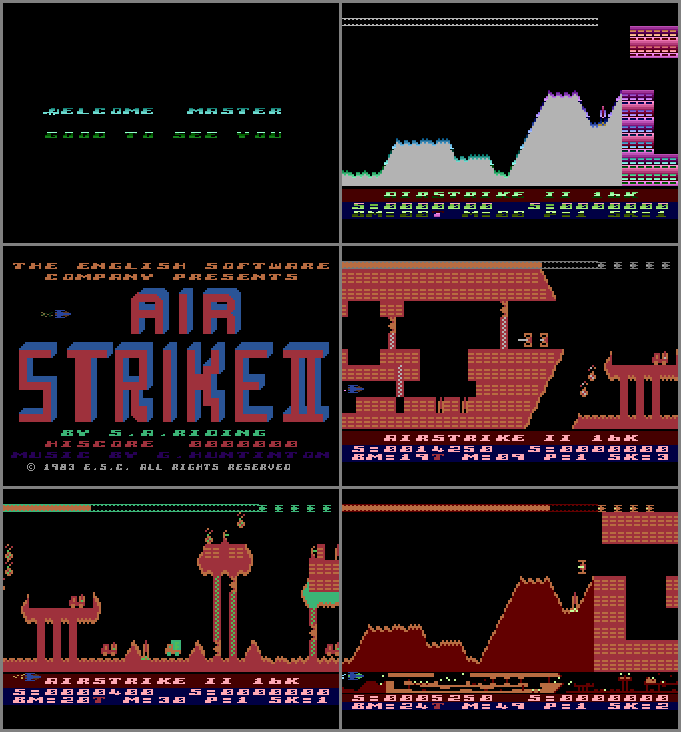