• The large “dragon” that appears in the large maze and the lower-left dark maze cannot be killed, nor can the poisonous gas clouds or rolling boulders.

• The large maze changes slightly between levels, specifically one room (from the bottom entrance, the room to the right one and up one).

• The room directly above the starting room is normally inaccessible.  If you drop a crystal in the alien guard room above that, a glowing door appears at the bottom of the screen (picture #1), but if you drop a yellow crystal on that section (picture #2), you’ll be able to enter it, where you’ll find a green crystal.  Be sure to leave the yellow crystal in place when moving between those rooms.  If you pick up the crystal or move it someplace else after placing it in the wall, the opening will remain and you’ll be able to pass through it, but if you try moving back to the guard room, you’ll be trapped in the wall with no way to escape.

• In later levels, the empty dark-blue rooms are replaced by another crystal puzzle (picture #3).  Touching any black area is lethal.  If you drop a crystal anywhere you can walk, the piece of ground jutting out at the top starts glowing.  If you drop a blue crystal on it, a “bridge” appears (picture #4).  As before, if you pick up the crystal or move it someplace else after placing it, the bridge will remain, but if you leave the room and come back, it will be gone.

• In later levels, the dark-brown room in the lower-right corner on the level 1 map is replaced by a green room featuring another crystal puzzle (picture #5).  This time, dropping any crystal will reveal glowing sections in the horizontal walls (picture #6), but you need to be holding a yellow crystal to pass through them.  The room below it holds another green crystal.  To get it past the green room, you have to drop the yellow crystal on each wall’s glowing section.

• There’s a dark maze (down at the 2nd ‘4-way’ intersection, and then left) where a large “dragon” will randomly attack you.  The green crystal will allow you to mark where all the walls are.  To use it, simply bump into the walls and they will light up.  Note that you’ll have to move diagonally in parts of the maze.  If you leave the room and re-enter, the maze will be completely dark again.  To beat the game, you need to exit the maze on the left side, at which point you’ll see the ending screen (picture #7 and video #4) with your final rating.

• The manual states sending an SASE to them to receive a map and clues on how to beat the game.  It’s unlikely any copies of these still exist, but here’s the maps for level 1 and level 4.

• BUG: In any room with an alien, if you are against the top wall and an alien moves up from either directly below you or from the right of you, it’ll stop when touches the top wall and won’t kill you.  This also happens if you’re against the right wall and it touches the wall before it touches you.  This trick allows you to escape the alien on levels where it moves faster than you.  {Scott Stilphen}

• BUG: In the large maze, if you’re in certain positions when the dragon attacks, it won’t be able to kill you (video #1)!  {Scott Stilphen} 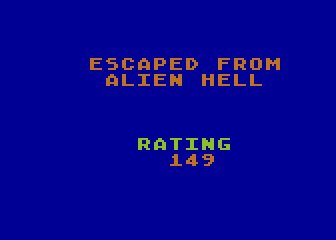