• According to Tim McGuinness, head of software publishing at Romox, a revised edition was developed, though it is unknown what the changes to the game were. The screenshot on both the box and cartridge label (picture #2) are possibly from this alternate version. Compared to an actual screenshot (picture #1), it shows score counters for two players (“PLR1” and “PLR2”) whereas the original only shows “SCORE:” and “BONUS:”, for either a 1 or 2-player game.

• A total of 3 anteaters will appear at once. The gameplay speed will max out after a few levels. There can only be a maximum of 35 flowers across the top, which will leave you only one small opening in which to reach the food.  Also, the maximum number of reserve ants that can be shown is 19 (picture #3).

• A rock can only kill one anteater at a time.

• The title screen shows the name as “Ant-Eater” but the packaging shows it as one word, and the ad/flyer shows it as two words.

• BUG: If too many reserve ants are stored up, the reserve icons will cover up the area where your reserve eggs are displayed (picture #3).  {Scott Stilphen} 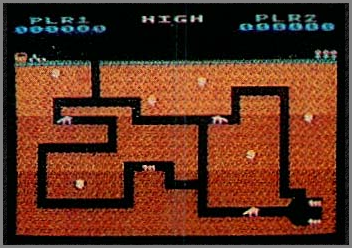