• The game is actually a modified version of the original 400/800 version by Rob Fulop. The biggest changes were the elimination of the rocket, the addition of bunkers, and invaders that resemble the arcade version.  The mystery ship will drop extra invaders (ala Deluxe Space Invaders) and no longer will pick up your bunker after 8 waves.

• You can’t shoot cleanly through the bunkers, unlike with Deluxe Invaders.

• The invaders reach the lowest starting point on invasion 11.  With invasion #12, they start back at the highest point.

• BUG: If you shoot the last invader right when it’s about to land, the explosion graphics will land and end the game (picture #1)!  {Scott Stilphen}

• BUG: A stray shot will sometimes fall from the top of the screen.  {Scott Stilphen} 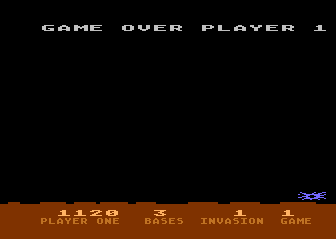