• EASTER EGG: During the title sequence, if you type “AUTHOR” between the fade in/fade out of the credits, you’ll get the real credits – “Concept, Graphics, Dynamics, and Control Structures..DAVID LEVINE  Music, Sound Effects, Rules, and Droid Strategies..PETER LANGSTON” (pictures #1 and #2). This doesn’t work in the Ballblaster prototype version as the credits “Concept & Program  D. Levine  Sound & Autoplayer  P. Langston”) are not hidden.

• EASTER EGG: If you win a game in the 1st minute, the initials “DL” and “PSL” (for D. Levine and P. Langston) will appear in the lower-right corner of the winning player’s screen, but only when you are on the right side of the playfield (picture #3).  This isn’t in the Ballblaster prototype version.  {David Levine}

• A prototype version exists with the title BALLBLASTER in a different font (picture #4).  Besides some text differences with the title screen credits (“Lucasfilms Ltd Copyright (c) 1983 Lucasfilm”), the text screens alternate faster and the theme music is missing the lead keyboard track.  It also doesn’t seem to have any selectable time options (defaults to 3 minutes).  This version was leaked by someone at Atari in 1983 – 2 years before the computer version was eventually released.

• The 5200 version is different from the computer versions in that it lacks an animated intro of the Rotofoils.  It also has slightly different text both on the title screen and with the hidden credits.  See the 5200 Ballblazer entry for more info.

• The working title for this was Topsy Turvy. 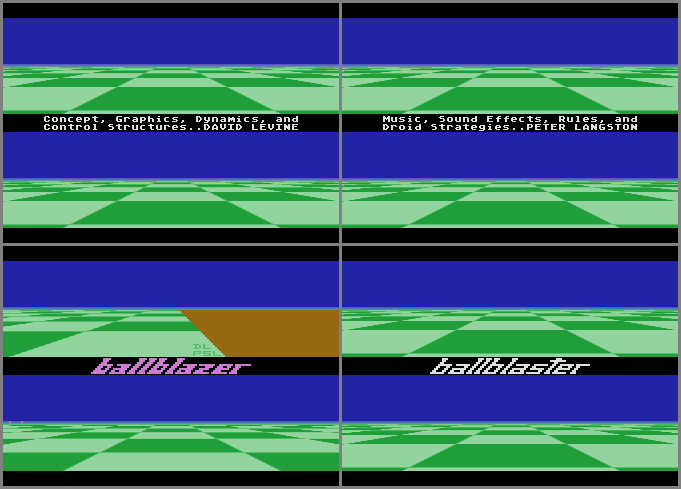 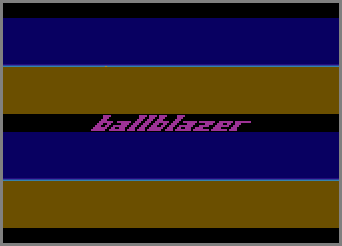