• There’s no ending in the game. If you complete all the caves on level 5, you’ll keep repeating that level.

• BUG: Some levels feature an escape door that’s not embedded in the titanium wall but rather protrudes from it.  Because of this, it’s possible to blow it up.  Pictures #1 and #2 show the escape door on Level O being destroyed as an example.  {Scott Stilphen}

• BUG: The timing in the PAL version is noticeably different from the NTSC version.  As a result, the screen doesn’t scroll as fast as Rockford can run, making it possible to run off-screen before reaching a border (picture #3).  A more serious issue occurs on the 3rd bonus life challenge.  The delay in Rockford’s appearance is serious enough that the level is not solvable - he enters the cave at the same time the fireflies reach it (picture #4), resulting in immediate death.

• BUG: If you enter the escape door just as the timer runs out, the timer will rollover and start counting down from 999 (picture #5). When the timer runs down to zero, you’ll get the message “OUT OF TIME” (picture #6), but if you press the fire button, you’ll continue to the next cave. 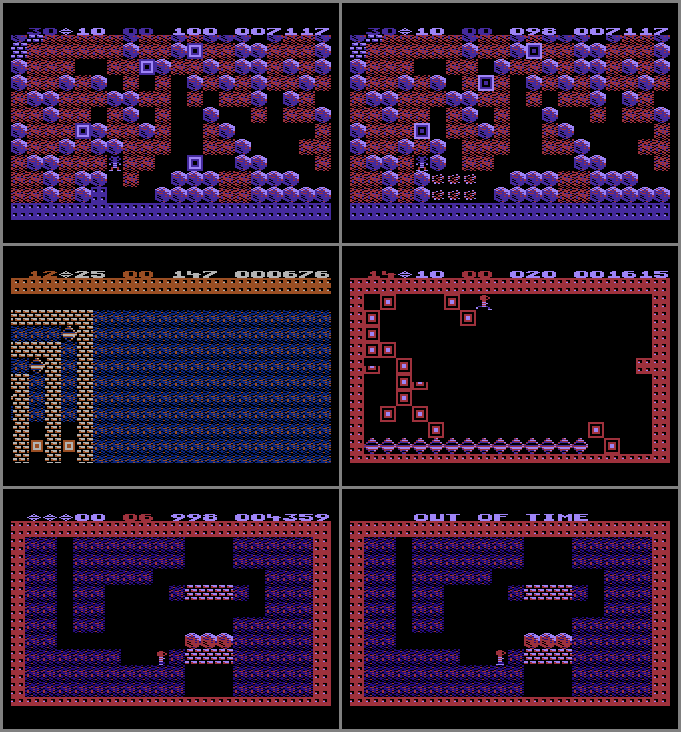