• 2 versions exist – Rev 1 and Rev 3.  To tell which version you have, start the game and press ALT+V.  You’ll see an extra bar of text appear at the top of the screen that says, “BRUCE LEE (C) 1984 DATASOFT REV.1 BY RJF” (picture #1) or “BRUCE LEE (C) 1984 DATASOFT REV.3 BY RJF” (picture #2)  The disk version of Rev 1 had different title screen music than the more common Rev 3 music.  Another difference is the title screen cannot be skipped past like the Rev 3 allows.  The cassette version is also Rev 1 but lacks the title screen and music.  A review in the January 1985 issue of Antic mentions not being able to skip past the title screen (and a reply to a letter in the July 1985 issue confirms it), so they clearly had a Rev 1 copy.

• The manual states you earn a free life at 40k and every 30k after that, but you also earn one when you collect the double yin yang (picture #3).  If you leave the room and return, the double yin yang symbol will reappear.  You can collect a total of 5 of them for 5 extra lives!  {Evan Gold}

• Picture #4 is the final screen showing the wizard’s fortunes.

• BUG: There’s an area on the 3rd screen where you can hang near the bottom of the ladder and push against the edge of the center platform (either the left or right side will work).  If either the Ninja or Green Yamo are standing in a specific spot underneath that edge (picture #5 and videos #1 and #2) when you push against it, you’ll hit them and receive huge points!  You can continually hit them without actually harming them (they won’t die) and quickly roll the score and falls counter.   Be careful, as it’s very easy to permanently hang your character up, with your character continually hitting them forever – there’s no way to break out of the loop.  {Scott Stilphen}

• BUG: The falls (reserve lives) counter changes to A0 after 99.  It then counts from A0 to A9, after which it changes to B0.  This pattern continues up to F9 (picture #5), after which it finally rolls over at 00 at which point you have no reserve lives!  It starts counting normally again, with 01.  {Scott Stilphen} 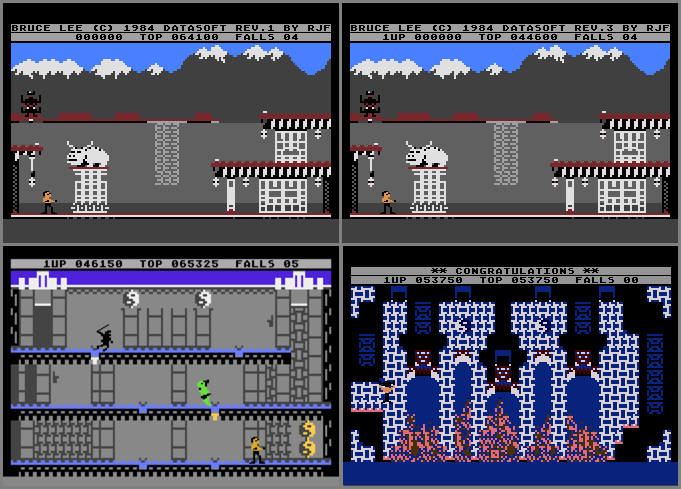 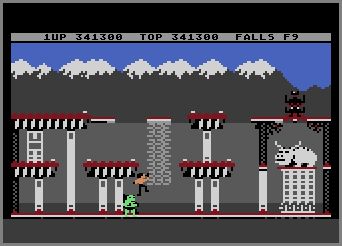