• EASTER EGG: If you hold down all 4 paddle buttons when turning on system, a secret credit screen will appear (see picture).

• HIDDEN MESSAGE: Hidden in the code is a message from Bryan Edewaard: "Hello, and welcome to the Castle Crisis ROM image. I've got a little bit of free space here at the end of bank 1 so here's some info about the game. This project started over 2 years ago because I wanted a portable way to play the awesome Warlords arcade game. I had a 2 player upright machine that I'd converted to 4 player (using modified Atari paddles) and it was a major hit with my friends. This may be why I prefer the upright color scheme - the cocktail just looks too weird. Anyway, my original goal was to have a 16K A8 cartridge that required 16K of RAM. This eventually grew into the 32K bank switched cartridge that was released. There was just no way to keep it fast and shrink the code enough (6502 code can be very compact, but unrolled stuff is much faster). Another goal was to represent the castles properly as 10x10 character blocks in a 32x30 environment. Since the Antic has no modes even close to this, the castles are managed in 5x7 pixel blocks. This keeps them from having that "stretched-to-fit" look that so many A8 games have. My friends and I have been play-testing it, and I think it preserves the arcade feel quite nicely (for instance, Castle Crisis seems to inspire just as much trash-talk in 4-player mode as Warlords). BTW... press SELECT for extended deathmatch modes, and hold all 4 paddle buttons at start-up for the hidden greetings screen. Game LEDs are supported as well (like those inside the arcade buttons). Pins 1&2 of each game port are pulled low to illuminate a player's LED. Also, the 1200XL's panel LEDs are used. Anyway, the 5200 version is next and will support those wonderful 5200 sticks (ack!) or paddle controllers. -Bry Dec 1, 2003". 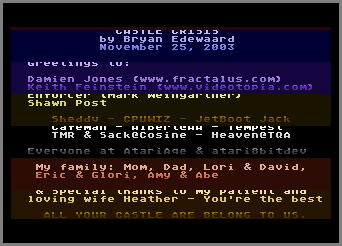