• BUG: The game crashes soon after you (1) order new items and (2) switch on the beacon - the top of the display becomes corrupted (see picture) and eventually the game locks up.  The reason is the data loaded between addresses $8600 and $87FF is actual source code rather than the game data required, which should be the graphics used for some items. This can be avoided if you don’t turn the beacon on, however when the items then arrive you won’t find them at the landing space; instead they are "thrown" all around the colony (some are even out of reach, meaning beyond the colony borders). 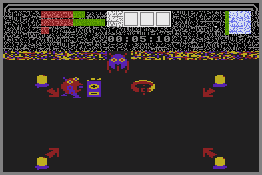