• EASTER EGG: The programmer initials “LMD” (for programmer Landon M. Dyer) will appear on the title screen (picture #1 and video) if you do the following:

2.  Kill off all of your remaining lives.  However, your last life must be killed off by falling too far - by walking or jumping off a girder that is too high to land safely.  If the last life is killed any other way, the egg will not appear.

3.  Set the game difficulty to 4 (the icon for this difficulty is a firefox).

• The highest possible score is 999,900, at which point the counter stops (picture #2).  The difficulty will remain at the highest level, and you won’t be able to earn a free man.

• BUG: On the ramp screen, once you reach the top ramp, nearly every barrel that rolls down the top ramp will roll right off the screen!

• BUG: When Donkey Kong opens his mouth there are 2 stray pixels in it – one blue and one orange (picture #3).

• BUG: When certain objects (such as barrels) pass in front of a ladder, the ladder can still be seen (picture #4).

• BUG: When Mario dies, the character’s graphics overlap each other. 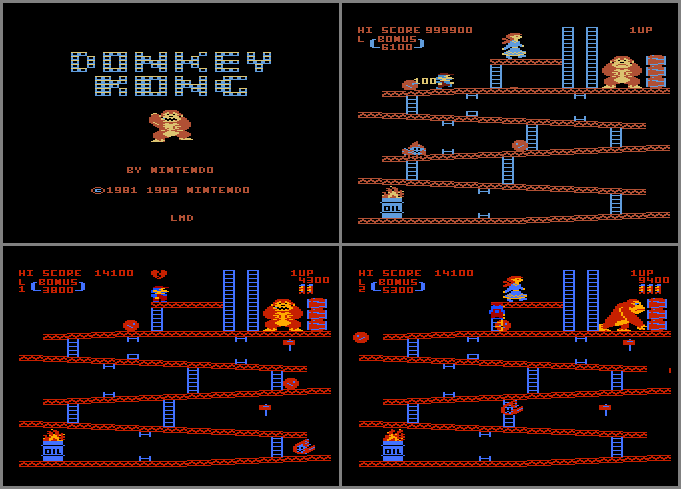