• The original APX 16k cassette and 32k diskette version loads up, pauses for a few seconds, and then starts you off at a fixed difficulty (the equivalent of Advanced on the Atari cart version) with a score of 12.  Also, all the cities are white.  Pressing the OPTION button at any time increases the muster strength of your troops by 50% (the copyright status bar will become slightly darker). Another version is very similar, except that it starts you with 25 points, but there’s no option to double muster strength since it’s already active. (picture #3)

• The 1982 Atari cart version has a revamped A.I. and several difficulty options (Learner – Beginner – Intermediate - Advanced – Expert.  If you select Expert, you can choose which year to start (1941 or 1942).  You’ll also have a different type of corp to use (the Flieger Corp), but you’ll start with a score of -128 (all other versions start you at 0, except for Learner).  The new version also added the ability to save and restore games (press OPTION to access the tape player), and added city names to the in-game map (highlighting a city will show the name of it), which were previously visible only in the manual.  German-captured cities are white, and Russian-held cities are red.

• The Finnish army can’t break out from the area they’re in unless helped, so it’s best to ignore them.

• BUG: An early prototype version had a fatal flaw in which a player could direct all his troops towards Moscow and simply hold the START button down, which would deny the computer AI time to think. This way, combat during the winter could be avoided entirely, allowing the player to break out the next spring with full-strength units. {Harry Brown}

• BUG: The APX versions have a glitch where the copyright line won’t clear itself unless you first press the fire button over open ground; if you press it over an icon, the text for it will be displayed on top of the copyright text (picture #4).

• BUG: The Atari version has a ‘notch’ in the upper-left corner of the map. 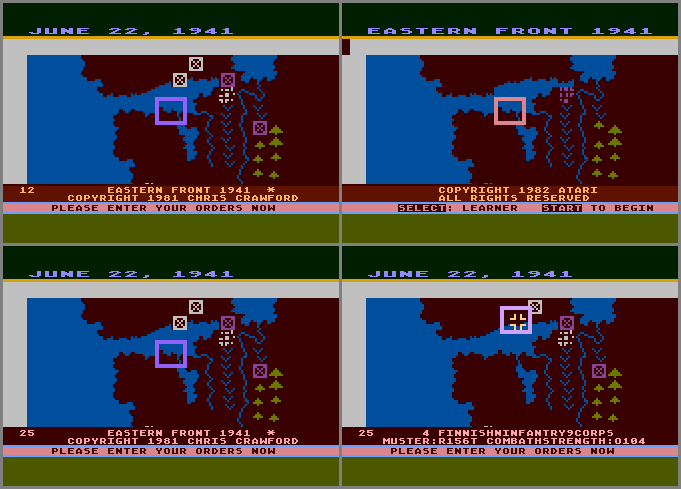