• There are a total of 30 different objects (not including Halley’s comet) that you can go to and land (pictures #1 - #30).  The hardest one to locate is Neptune’s moon, Iepetus, as it’s located some 5.5 million kilometers from Neptune.

• There are 10 missions in the game that need to be completed before you can access the secret Final Challenge mission.  The missions and their objectives are:

Shrike - any planet with no moon (Mercury or Venus)

Vulture – any moon with an atmosphere (Jupiter's Io and Europa, Saturn's Titan, or Neptune's Triton) + any inner planet

Condor – any planet larger than Earth + any moon larger than a planet (Jupiter’s Ganymede is larger than Mercury, and Io, Europa, Ganymede, Callisto, Titan, Triton and the Earth's Moon are all larger than Pluto) + any planet smaller than a moon (Mercury or Pluto)

Landing on Halley’s comet is the final requirement with every mission.  Video #1 is a complete walkthrough of the game.

• Secret Final Challenge mission: An “RFC” (Registration For Certification) card was included with the game, as part of a contest Mindscape was running.  If you completed all 10 missions, you qualified for a secret 11th mission.  Once you finished the Starbird mission, the screen displayed a “PIN” (Pilot Identification Number – picture #31). The PIN is based on the time it took you to complete the mission. If you completed the card and mailed it back to Mindscape before December 31st, 1985, you were mailed a personalized Starbird Certificate, along with additional information on how to access the secret 11th mission (select the Starbird mission, land on Earth, and type “MINDSCAPE”). You’ll see a Final Challenge screen appear (picture #32) along with your first objective.  When you complete all the objectives, you’ll see the Final Challenge identification number, along with a short animation of a guy collapsing (pictures #33 and #34 and video #4).  Those who completed the secret mission with the 3 fastest times, and mailed back the contest form (with the FCIN) back to Mindscape before April 1st, 1986 were eligible for prizes. What types of prizes they were wasn’t mentioned, and it’s unknown whether or not anybody ever won, or if the contest was even completed.

• There’s no time limit as far as how long a game can last. The clock will show a maximum time of 99:59:59 before it rolls to zero and starts counting again. The more time it takes you to complete the secret mission, the higher your “score” (or FCIN) will be.  Pictures #33 and #34 show the highest and lowest values.

• BUG: When slowly adjusting the icons on the radar screen, an icon will knock out a pixel from the border of the screen when it comes in contact with it. It will remain missing until you toggle the screen off (video #2).  {Scott Stilphen}

• BUG: With the secret mission, the game considers landing on Earth the first objective, because when you land on Triton, it states you fulfilled the requirements for the second part of the Final Challenge, even though the first real objective is landing on Triton. 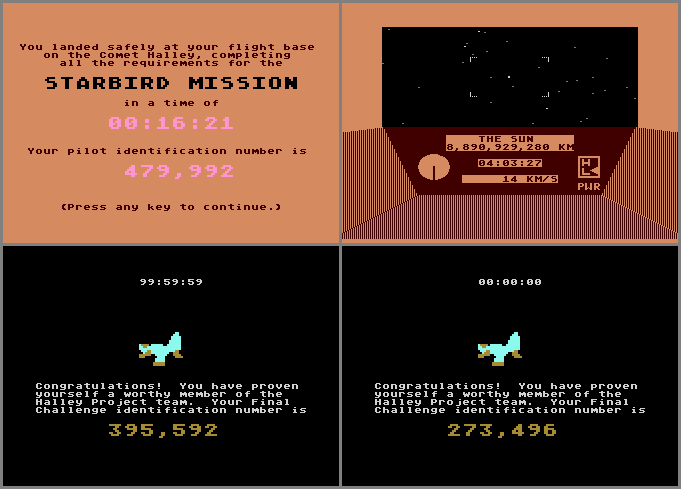