• A prototype exists that has the same copyright info (picture #1) the 5200 version has; the computer released version (picture #2) credits both Taito and Atari.

• The computer version has an attract mode, something the 5200 does not.

• There’s a corrupt version of the game that’s been floating around in pirate compilations for decades.  The easiest way to tell if you have a copy is the sound f/x on the boulders section will be incorrect (either a loud, continuous hiss or crashing and beeping noises).

• BUG: If you fall during the rope section, your character usually turns black when you hit the ground (picture #4), although occasionally you turn all white. This is easier to see if you fall at the edge of the “void” (where the river should be).  {Scott Stilphen}

• BUG: If you have a monkey above you on the same rope and you're both close to each other, you must wait until the rope swings over to the left before jumping, otherwise the monkey will punch you straight back to the right!

• BUG: If there's a monkey on the last rope, it will disappear when you jump into the river!

• BUG: Beat the 1st level. While your remaining time is being added to your score (during the congratulations screen) press START twice (to end the current game and then start a new one).  Your time will still be added to your score, but it uses the current timer (which starts at 9990), giving you 15,000 points and an extra reserve life to start with (picture #3)!  Also, the other “timer” that gives you a limited amount of time to stay on a rope won’t be in effect, so you can stay on any rope as long as you want.  On the river section, the air meter will never go down – it must be tied in with the timer, which is still showing 0000.  The timer gets reset once you hit the boulder section, but it starts at 9990 so you'll once again get mega bonus points when you beat the level, giving you approximately 50,000 for level 1!

• BUG: There’s always a small margin on either side of the screen that certain foreground objects will appear in (explorer, rope, alligators, air bubbles, and boulders), but background graphics will not (pictures #5-#8).

• BUG: In the river section, when the second column of air bubbles finishes reaching the surface, there’s no sound effects for swimming on the surface. 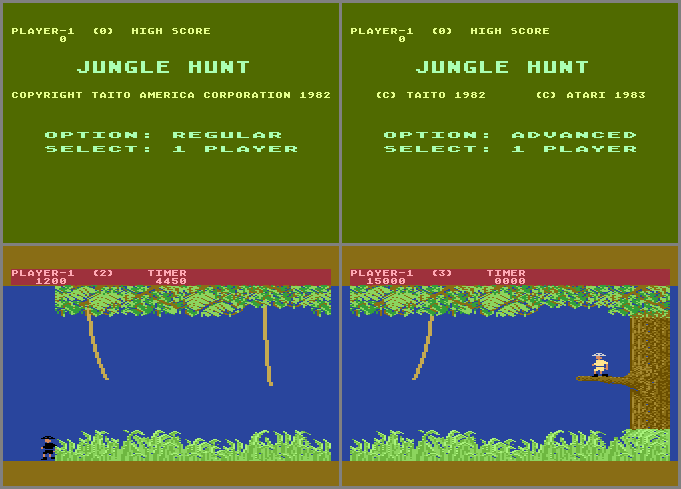 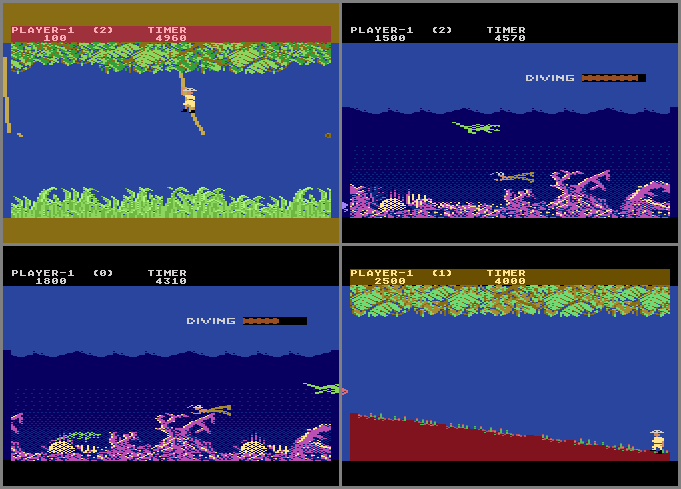