• It’s possible for both fighters to kill each other at the same time (video #3).

• If you run towards any enemy (man or bird), you’ll die as soon as you touch them, even though they won’t even have time to hit you (video #4).

• If you push your opponent backwards through the main entrance, you’ll advance to the next level (video #5).  {Scott Stilphen}

• Your opponent can’t trigger the spike gate to come down (only you can), but it’s possible to trigger it to fall on him.  You can also push him back through it when it’s closed, or trigger the gate to close when he’s behind it, temporarily trapping him (picture #2 and video #6).  {Scott Stilphen}

• It’s possible to keep Akuma in the final room (picture #3) and defeat him there (picture #5 and video #7), but you will only be able to push him back so far.

• If Akuma beats you, he will look back towards the Princess (from whatever room he’s in - picture #3) just before the screen fades out.

• When you beat the game, a message will appear (picture #6).

• BUG: When you’re fighting Akuma in the last room, the last 4 health indicators for him will be distorted.  This becomes more apparent when there’s 4 or less indicators left (picture #7 and video #7).  {Scott Stilphen}

• BUG: The XE cart version has graphics glitches in the second area around your feet and your opponents when you kick.  {Scott Stilphen}

• BUG: The 8-30-85 prototype sometimes has a sound glitch when you’re in the last section and your strength drops low enough to sound a warning.  You’ll start hearing part of a transition melody playing over and over (video #8).  This will last until you rescue the princess, even playing over the closing credits!  If you die before rescuing her, the ending melody plays with lower bass.  {Scott Stilphen}

• BUG: The 8-30-85 prototype sometimes has a sound glitch when you’re in the last section and you defeat the last guard.  You’ll start hearing part of a transition melody playing over and over.  This will last until you rescue the princess, even playing over the closing credits!  {Scott Stilphen}

• BUG: If you kill a guard with the sound glitch in the 8-30-85 prototype version, parts of the contact explosion graphics may remain onscreen (video #9).  If you move over them, they’ll disappear.  {Scott Stilphen} 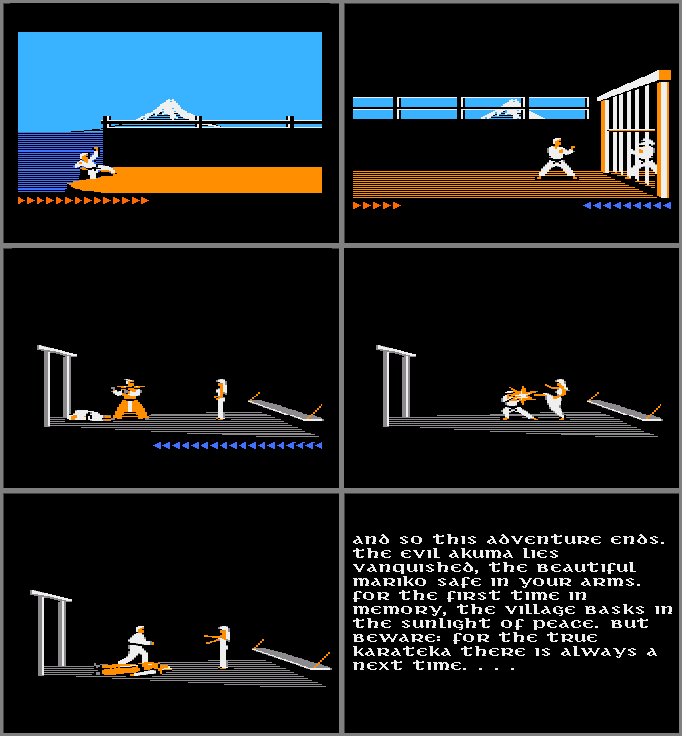 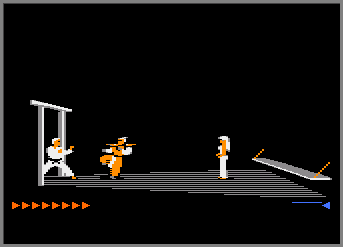