• HIDDEN MESSAGE: The layout of Rift 13 shows “SEE LABYRINTH tm” in the terrain (picture #2), which is ironic since it was never released for the Atari 8-bit.

• Is the 5th monitor screen used with any modules?

• Does the ECM module have any purpose?

• You can completely avoid the Guardian Saucers by returning to the ship after driving for a few seconds. It takes a lot longer to beat, but this trick is very effective on later rifts if your shields and weapons aren’t good enough.

• The targeting module works for certain Guardian Saucers, depending on the color

There are 4 hulks (#4, 5, 6, 7) along the bottom part of Rift 6 that look like the giant gray toads (picture #4). If you send out the Repo-tech robot to loot it, the toad will open its giant mouth and swallow it (picture #5)!  You can return to the ship to replace the robot.  If you destroy the hulk, it makes the other toad hulks self-destruct!

• Hulk #4 in Rift 7 (the first hulk you encounter) looks like a blue Ballblazer Rotofoil (picture #6). If you loot it, you will get an undocumented module that looks sort of like a TV. Activating it will play a bad version of the Ballblazer theme music.

• Hulk #3 in Rift 11 (the first hulk you encounter) looks like a pink Ballblazer Rotofoil (picture #7). If you loot it, you will get an undocumented module that looks sort of like a TV. Activating it will play a bad version of the Rescue on Fractalus theme music (video #2).

• The layout of Rift 20 shows “20” in the terrain (picture #8).  This is where the Guardian base is, and it’s actually hulk #7 and not #5 (the one placed between the “20” mountains, because that would have made sense…).  All the other hulks are just bases with guns that shoot a gray laser that is absorbed by all your shield's colors. Your tank’s gun has a longer range so you can shoot these from a distance if positioned correctly. At the last base, activate the detonator and send out the Repo-tech robot - the base will explode and you'll see the worst Lucasfilm Games ending ever (picture #9), after which you start back at Rift 1.  At least the C-64 version had a scrolling text message for you when you go back to the ship.

Go straight to rift 4, drive forward and loot the hulk for the detonator.

Skip all the other rifts and go to rift 20.

I seem to recall the enemy base is at point 5. If you do a 180 right as you land and go in between the mountains you should see it.

• Unlike the Commodore 64 version, there’s no ending, and no text scroll from the Psytek robot.

• BUG: When moving modules from the conveyor belt to your Scoutcraft, wait until the module appears in your panel before trying to move another module from your Scoutcraft to the belt, otherwise you will accidentally replace one module for another, and you’ll lose it.

• BUG: A serious glitch exists on rift 20 that can make the game impossible to beat (video #3).  If you loot the base w/o the detonator, or w/o it being active, the base will still explode but the game won’t end.  At this point, the game is glitched.  The Repo-tech won’t return when the base explodes, and as a result, saucers won’t come out because the game still thinks the Repo-tech is hovering outside where the base was.  You can’t call the ship (it won’t work).  You can drive around and destroy any other bases, but you have to shoot the Rebo-tech in order to return to the ship.  The same glitch occurs if you try to loot any other hulks (whether or not you have or use the detonator makes no difference). 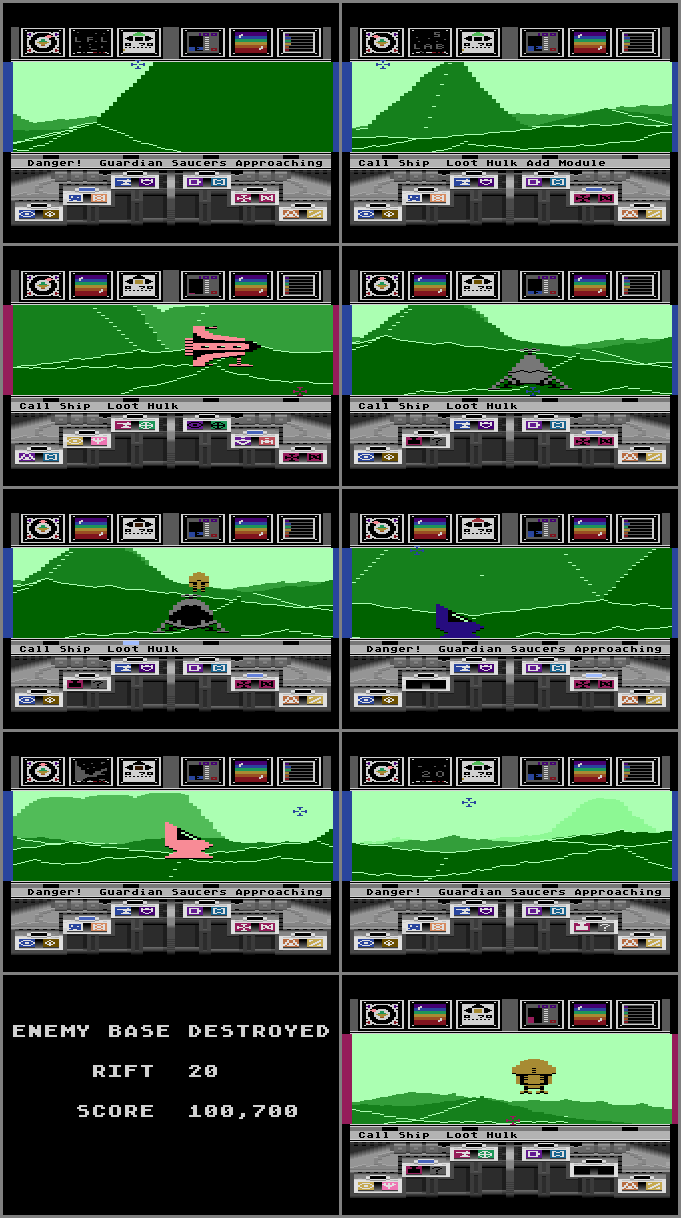