• The droids move about twice as fast on level 7, compared to level 6.  There’s also twice as many droids on level 7, so it’s apparent level 7 was designed to intentionally end the player’s game.

• BUG: The manual mentions there are only 7 sectors, but if you manage to last long enough (shooting approximately 100 droids), you can clear the level and advance to level 8!  The speed of the droids will reset to that of level 1, but the speed of their bullets will remain fast.  Since the droids move so slowly, it’s impossible to shoot enough to clear the round, thereby making level 8 a kill screen.  {Scott Stilphen}

• BUG: Either you or a droid can be shot through a wall if either stand close enough to it (picture #3).

• BUG: It’s possible for a droid to shoot through you.

• BUG: A few mazes will generate areas on the left side of the screen where droids will not attempt to move around a wall or out of a small, walled area to get you.  In picture #4, if I moved higher than the walls, the droid remained where it was, but if I moved to the bottom of the screen, it would move down and around the wall.  In picture #5 the droid in the lower-left corner will remain there.  {Scott Stilphen}

• BUG: The manual is a bit contradicting with the penalty for leaving a level before shooting all the droids.  It says if you don't shoot them all before the end of the red "alert" zone, you have to replay that sector, but if too many droids are left, you'll be forced to replay 2 sectors (pushed back 2 levels).  I've started on rounds 3-6 and exited the level at different points - as soon as the level started, with the timer bar in yellow, and with it in red, and I've always been pushed back 1 level.  You replay the last level w/o scoring any points.  However, leaving level 8 early (no matter what color the timer bar is) gets you pushed back 2 levels.  Punishment is also cumulative.  For example, if you leave level 7 and go all the way back to level 1, you’ll have to get back to level 7 before you can start scoring points again.  {Scott Stilphen}

• BUG: The manual says you can only have a total of 4 space commanders in reserve at any time, but you can actually have 5.  If you have 5 in reserve and you earn a 6th, you won’t be credited for it.  Also, if you reach level 8 with 5 lives, you’ll need to kill off 2 before you reach the next 10k (40k in this case) for it to count.  {Scott Stilphen} 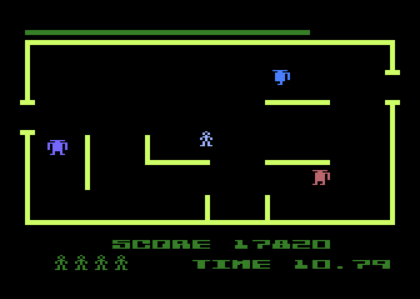