• At least 3 different versions exist.  The original (brown) cart version works with either a joystick or trak-ball, but not with a mouse.  The version built in to the XEGS works with all 3.  A compilation of 5 different games (one being Missile Command) on cassette was released in 1987 in the UK.  This version of Missile Command is lacking the onscreen title (picture #2) that’s the on original cartridge (picture #1).  It also has “STICK” instead of “SKIP0”.  There’s no level select with this version, but if you change the controller to a Trak-Ball, it will change to “TBALL” (picture #3).  It’s rumored this version was from a later production run of the original carts.  The 5200 version is different again, with the initial screen missing the “COPYRIGHT 1981 ATARI” text (picture #4).  This version is automatically configured to work with analog controls.

• BUG: Occasionally a base will disappear but you’ll still have shots left.  The problem was, as the first wave of missiles grow, they lay down a graphic and the graphic is erased, so the terrain gets “erased” when the 2nd wave of missiles come down, and the 2nd missiles would collapse and erase the base, but the base would be replaced just before the missiles collapse routine went into effect.  {Rob Zdybel}

• BUG: The first time you power up and play the game, the first sound f/x that plays is wrong.  As soon as another sound effect plays, all the sound f/x are correct from that point on, and in subsequent games.  Also, you can't start on different levels on XL/XE; the 1-9 keys don't do anything.  {Michael Current}

• BUG: The level select option doesn’t work on XL/XE computers unless you use a Translator disk. 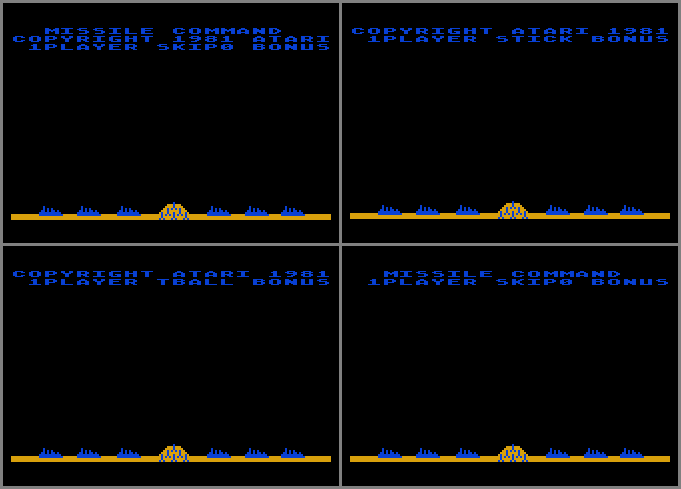