• 2 different versions exist!  A prototype 48K version was done by Utopia Software and features an animated title screen (picture #1) & introduction (picture #2), as well as replacement and bonus life animations (pictures #3 and #4), King Montezuma himself (picture #5) and even a high-score entry screen (picture #6) - but no ending (it’s essentially an incomplete CES demo).  Parker Brothers bought the rights and released a 16K version which lacks everything mentioned above, but includes a number of differences, such as a different name and hat for your character (picture #8), a continue feature, less rooms, no bats, and an ‘ending’ (pictures #9 - #12)!  Bootleg copies sometimes referred to it as “Preliminary Monty” (picture #7).  Note these copies (by pirates Steve and Bruce) are flawed in that they have 2 rooms on levels 1, 3, and 4 that are glitched (the left-most-screen on the 9th level down has some graphics issues and entering it will corrupt the inventory and score boxes, and the room below it on the 10th level is incorrect and features a rope at the top of the screen that goes nowhere).  Also note the UK releases by Databyte (both disk and tape) contain the same bugs as the pirate version!

• There are 9 levels, although only the first 4 are different (levels 5-9 are the same as level 4, except with varying numbers of invisible rooms).

• Every level except #1 has 2 torches!  The reason for this is unknown.

• All but one of the ‘boundary’ rooms (those at the sides of the pyramid) end with brick walls - one on the lower-left side has a bridge-less fire pit with the other end open.  This room is on every level except #2 (the left side of the pyramid isn’t accessible on that level).  Is there any way to reach it?  Is this a glitch, a secret passageway, or simply the result of sloppy programming?

• BUG: The 48K version has a number of glitches in it.  You can become trapped in one area if you enter it (trying to leave will result in death), and in lower rooms you often see a spinning skull at the top of the screen (one screen has 2 trapped inside a wall).  There’s also 1 sword that can’t be reached, and one (red) key that isn’t needed.  The most interesting glitch ultimately allows you to increase the maximum score far beyond what is normally possible (see below).  Unfortunately, as an unfinished game, there’s no way to defeat King Montezuma.

• BUG: scoring tricks (48K version) – With normal gameplay, the maximum score is around 53k but there are some scoring tricks that allow you to get well over 200k!  On the screen with King Montezuma, if you climb up the ladder beneath the blue door (make sure it’s locked and you don’t have the key), you’ll be able to climb up the door and right into the score box!  From there, if you walk right to the next screen, you’ll now be in the inventory box.  If you jump up and touch anything in your inventory, the game will act as though it’s any other object you can pick up (ex: If you jump and touch a sword, you’ll pick up multiple swords).  If you walk left to the last screen and this time run and jump towards the right (from about the “hundredths” place in your score), you’ll end up in a wall 1 screen left and up from K.M.  If you keep jumping, you’ll hop up the wall and reach the pathway at the top.  From there you can go around and start killing all the skulls and spiders you can find.  You’ll just have to keep returning to replenish your swords (make sure you keep at least one in your inventory, to “copy”.  Once you’ve done that, your score will be approx 225k.  The other scoring trick involves sacrificing some of your reserve lives.  The spinning skulls at the top of some screens can also be killed, provided you’re in the right position underneath it when the bat grabs you!

• BUG: The manual mentions if you miss a chain and land on a pole, you'll immediately lose any chance to collect more treasure.  It also mentions you'll automatically advance to the next level when your time in the treasure room runs out.  Both of these statements are incorrect.  You can miss as many chains as possible in the allotted time you have in the treasure room.  You can only advance once your time is up AND you either jump and miss a chain, or jump offscreen.  {Scott Stilphen}

• BUG: The 16K (released) version has a serious bug in the treasure room that will end your game.  If you drop down from either of 2 specific area when the time to collect treasure runs out, you’ll miss both poles and crash into the platform to the right or left of the poles.  If you have any reserve lives, they’ll fall down from the center of the screen, but too high to survive. 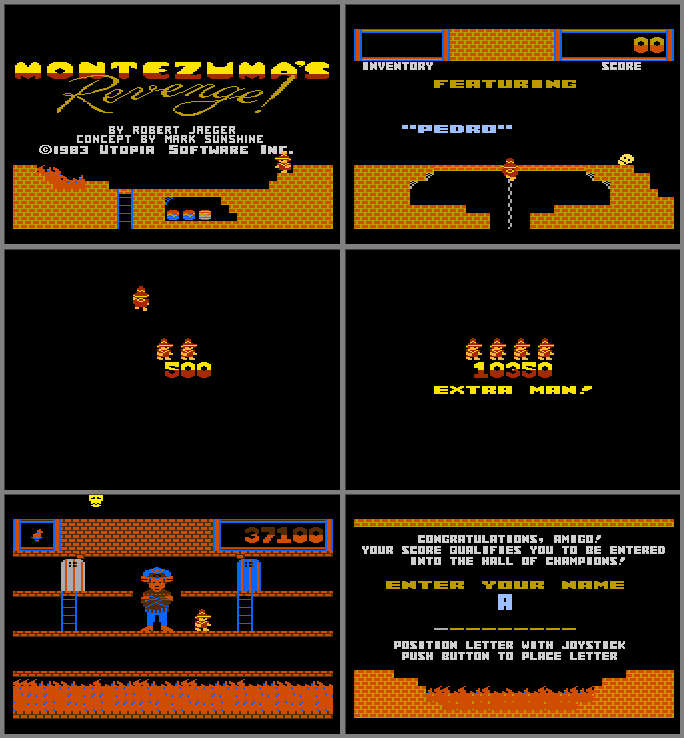