• When the Easter egg is triggered, code is executed at $3114 that looks for RAM installed at $C000 (a jump to $C000 – the “Omnimon” address.  Omnimon means "Do not steal" in Dutch), and a jump instruction at $C001. Most EA programs have a protection check against Omnimon, which is done early during the boot stage.  If you run the original MULE with Omnimon active, you get a message "REMOVE CUSTOM O.S".  However, this particular code execution doesn't appear to be related to Omnimon, but rather a break into a custom monitor/debugger (the code checks for RAM at $C000, but nothing is done if there is no RAM), which is typical in many games. The monitor code was obviously removed for production release, but for some reason the entry point was left. 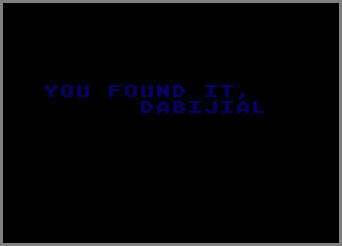