• BUG: The game is plagued by several different glitches, sometimes resulting in the game locking up.  The game may crash at random times.  One cause may have something to do with the timer running out as you grab the last item.  Someone noted Nibbler’s head sailed off the top of the screen.  Also, if your tail is alongside the last item and you grab it by moving towards your tail, you’ll grab the item and then crash into your tail and the game won’t acknowledge that you got the item first (you’ll die and repeat the level if any lives remain).

• BUG: When you are on the "dots" screens and approaching your vertical trunk from the sides, you can nibble yourself at high speeds and cause the game to lock up.

• BUG: A programming error is one reason why the game crashes. It’s caused by trying to change the DLI address immediately after disabling the DLI; this fails due to interrupt dispatch latencies and the game crashes because only one byte of VDSLST was changed.  It's not NTSC/PAL specific.  A NOP in between the writes to NMIEN and VDSLST would probably fix it.

• BUG: Past wave 20, Nibbler’s tail starts to leave a trail of dots (see picture), which gets longer with each wave.

• BUG: After wave 38, the Nibbler’s speed will slow down (reset?) and start speeding up again with each successive wave. 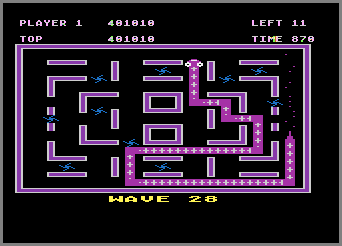