• 3 Atari-made versions exist!  Besides the original cart release, there’s a more complete version (that may have been released on disk) that includes the omitted (due to cart memory constraints) intermissions (picture #1) and attract mode screens (pictures #2 - #4).  It also has a more arcade-like dot-eating sound f/x.  There’s also a slightly different version that is similar to the cart version (pictures #5 and #6), except that the copyright date is larger (picture #7) and it also appears on the options menu screen (picture #8), there’s a different sound f/x for eating monsters (same as prototype version), and characters "pop" from one side of the tunnel to the other (same as prototype version).  It’s unknown if this version was released either.  It could be a later prototype version than the one described below.

• A prototype version exists that has a number of differences from the cart version.  It doesn’t have a title screen, options menu, or intermissions - it simply alternates between the character/nickname screen (picture #9) and an ‘empty’ maze (picture #10).  Also, monsters reverse direction more frequently, and are slower and never speed up on higher levels; no bonus Pac-Man at 10k; Pac-Man’s mouth has slightly less resolution (picture #6); different sound f/x for eating monsters; characters “pop” from one side of the tunnel to the other.

• BUG: The player’s speed doesn’t increase after each level, unless you lose a life.  This is most noticeable when going from the peach board to the apple; if you start a game on the apple board, you’ll move at the correct speed. It’s unknown whether or not this bug is present in all versions. {Bob DeCrescenzo}

• BUG: The player’s speed doesn’t increase after each level, unless you lose a life.  This only happens when working your way up to the level (ex: if you started on the first Apple, your speed was fine).  If you worked your way up to the 1st Apple, the speed wouldn't increase until the 2nd Apple. {Bob DeCrescenzo}

• BUG: Starting with the 1st apple, the monsters only flash once before turning back.  In the arcade version, they always flash twice. {Bob DeCrescenzo}

• BUG: If you have any reserve lives when you eat a monster and the points for it are shown onscreen, the top of the reserve icons will be the same color as the points numbers (picture #11).

• BUG: The top of the Atari symbol bonus items at the bottom of the screen) are a different color (picture #12). 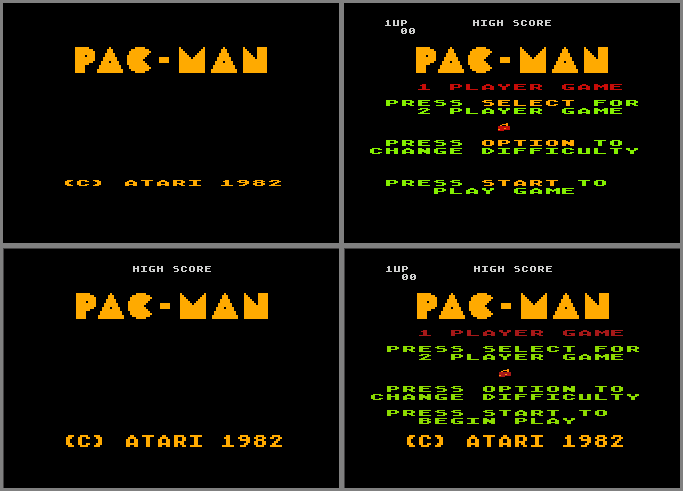