• The difference between this version and the original is the addition of earning extra satellites and the terraforming bonus.  Every 5,000 points earns you an extra satellite.  Every 8,000 points you score, your planet will be "terraformed" to replace up to 25% of its damaged radius, giving you extra play time.  When the game ends, “GAME OVER” flashes at the top of the screen, instead of simply going back to the title screen like the original version.

• BUG: Flying saucers sometimes fly along the left-most edge of the screen (see picture).  They’re very hard to hit when they do this, but they won’t fire at your planet.  {Scott Stilphen} 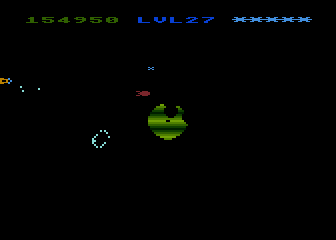