• The 4 different tracks (Practice Run, Malibu Grand Prix, Namco Speedway, and Atari Grand Prix) are all the same track.  The only difference is the number of cars and billboards.

• The PAL version is easier and allows for higher scores.

• BUG: The amount of time added when you get extended play seems to have a roundoff error.  Sometimes it adds a few more seconds it seems than it should.

• BUG: When passing cars while driving down the center of the track on a straightaway, you will sometimes lose speed.  On rare occasions, your max of 195mph will increase to 211mph passing cars in the last straightaway before the finish line (picture #2).  If triggered before the final lap, and you complete the next lap without hitting anything or leaving the track, you might see your speed at 227mph (picture #3)!  It seems that if you gain enough time on each lap, you eventually run over the most it will display, and then you’ll get a speed of 211mph until slowdown or crash. It took me about 5 laps to build up enough time.

• BUG: You never actually reach the start/finish line at the end of the race (video #2).  You also will finish the race even if you crash right before the finish line!  {Scott Stilphen}

• BUG: It’s possible to earn too much extended time on the PAL version in an 8-lap race.  If you’re too fast, the glitch where you earn more than the maximum 99 seconds will occur on the 5th or 6th lap, and you’ll start the next lap with only a few seconds.

• RUMOR: Someone claims they crossed the finish line during qualifying with 4 seconds left and earned 8th place. 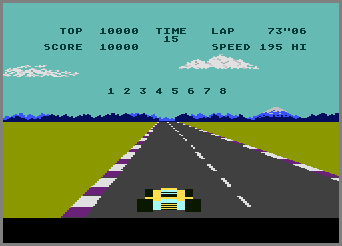