• HIDDEN MESSAGE: A secret encoded message appears on the screen after completing a level.  Every completed level adds a new line of code, of which there are 9 total (picture #1).  After completing 9 levels, the game ends.  This was part of a contest by Penguin, and whoever solved it earned themselves a free Spy’s Demise T-shirt.  From the manual: “If you think you have solved the puzzle, you will know what to do next.  You’ll then be asked to submit a dossier consisting of your name, address, and the score achieved when the end of the puzzle was reached. For those who think that the secret may be found in the program code, sorry, you’ll be doomed.” DP’s own Kristine Roper solved the puzzle, which turned out to be a simple crytograph:

Which breaks down into the following riddles (and what we believe are the correct answers):

ask for l sanderson (according to the programmer, there was no "L. Sanderson" working there. The number was to a related company, a software distributorship named SoftCenter. They all knew what it was about if a call came in for "Sanderson".) 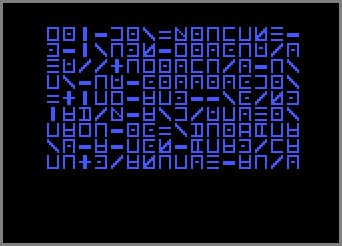