• EASTER EGG: According to programmer Landon Dyer, an Easter egg is known to exist in the latest version. To trigger it, reset the game after completing a stage (while the screen is flashing yellow) and the message "4 A GOOD TIME JSR 91BD" will scroll across the bottom of the screen (picture #2 and video).  "JSR" is a programming instruction that means Jump to SubRoutine, and is the computer assembly language equivalent of "CALL", and "91BD" refers to a memory location.  According to Dyer, “91BD was supposed to do something more interesting (I dunno, maybe a shower of pacmen or ghosts or something), but I didn’t finish it up.” For more information about this, check out Don's site.  {Don Hodges}

• HIDDEN MESSAGE: Using the Atari 800 Win emulator, set it to 5200 mode and load the Atari 8-bit 400/800 cart version instead.  You get a "beware pirates" message on the title screen (picture #3), and then the game crashes.  It seems somebody replaced spare $FF bytes at the end of the prototype version with a string of "bewarepirates" text. {Scott Stilphen}

• The program will automatically detect what system it’s running on (400/800 or 5200) and configure itself for that system. 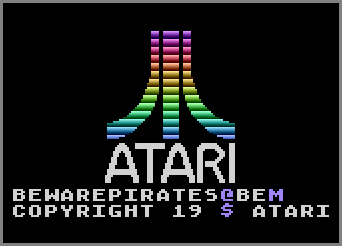