• EASTER EGG: When running the full diagnostic test on a 1200XL, the keyboard will spell out the programmer’s name, “michael colburn” (see video).  This was removed with the 600XL and 800XL, with the keyboard test now spelling out “Copyright 1982 Atari”.

• Another neat effect with the 1200XL’s diagnostic program is that the system’s L1 and L2 LEDs alternate with each block of memory tested.

• Many people, noting that the 800XL is advertised as a 64K machine, assume that it gives you 16K more RAM (random-access memory) for programming than the 48K Atari 800.  However, the 800XL actually has about 20 fewer bytes of free RAM in BASIC than the 800 does.  Apparently, Atari intended to "bank select" (swap ROM for RAM) the extra RAM in certain programming environments.  As a result, they added some "pointers" in lower RAM to help the Operating System (OS) keep track of which RAM/ROM configuration was in effect.  These pointers are largely responsible for using up the extra bytes of RAM noted above.

• Multiple versions of the OS code were made.  To check which version you have, in Atari BASIC type “PRINT PEEK (65528).

See this site for details.

• The keyboard test in the 600XL/800XL OS will type out a “1983” date; the XEs will type out “1985”.  The memory test in the XEs runs faster, and can test for extended 64K of memory (shown as 4 large blocks at the bottom of the screen).  Although the XEGS only has 64K of memory, the test program is essentially the same as the 130XE and is capable of testing extended memory.

• Several programs originally designed for the 400/800 systems will not run on XL/XE systems because of changes made to the original 800 OS.  To get an overview or see a chart of these changes, refer to Antic Volume 3, Number 2 (June 1984), pages 10-14.  To correct this problem, Atari issued a set of Translator disks, which loaded the original 800 OS versions (pictures #3 and #4) into your XL/XE prior to running a disk-based program. To use the Translator disks with cassettes, press START + SELECT when it’s finished loading.  Some of these have been patched by homebrew programmers over the years to work with the XL/XE.  Here’s a list of reported titles that are incompatible (the list is maintained here):

• BUG: The operating system has an inherent flaw in the S: handler routine. For example, using certain (S: handler) values meant for use by the E: handler, such as 155 (EOL/line feed) and 125 (clear-screen) end up being interpreted by the S: handler instead.

If the COLOR values are changed to 1 and 2 respectively, you’ll see that the programs original intention was to draw 2 differently-colored horizontal lines.

• BUG: The infamous “scanline 240” bug is a result of Atari’s Antic chip not correctly disabling the display generation on what’s normally the last line of the display when in a high resolution mode (2, 3, or F).  Instead of it sending a constant HBLANK command to GTIA, it constantly sends a command to generate 2 pixels of high resolution ‘on’ pixels when the display is normally active, and then sends the HBLANK again to each scanline, but at the wrong time.  The result is the HSync pulse jumps out of step and the display becomes warped. 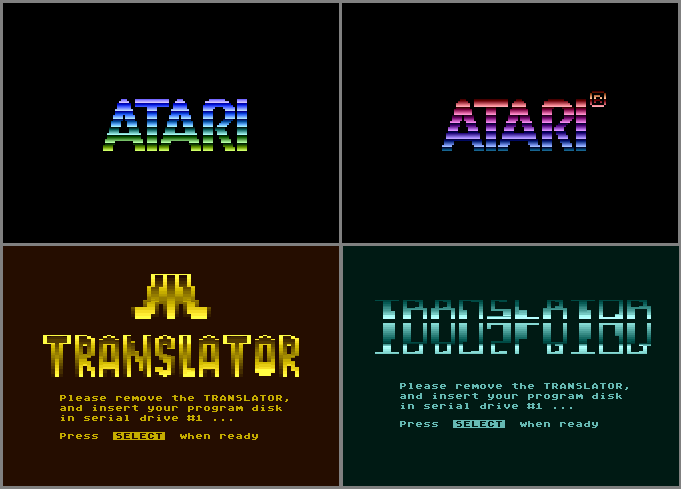