• 2 versions exist!  The original version has the rocks and flickering line glitches described below.

• (Original version only) - If two joysticks are plugged in and both moved at the same time during the game, unexpected things can happen (the same effect will happen if you use either controller).  UP+DOWN+RIGHT = “blast off” slow (picture #1); UP+DOWN+LEFT+RIGHT = “blast off” fast; DOWN+LEFT+RIGHT = “land/burrow” slow (picture #2); UP+LEFT+RIGHT = “land/burrow” fast; one joystick LEFT and the other RIGHT = turn invisible.  Repeating this lowers your score.  If your ship is not visible (from using any of these tricks) and a rock falls on where your ship actually is, the screen turns red and the base counter will constantly cycle from 99 down to zero (picture #3).  The only way to get out of it is to RESET.  {Dennis Jenkins}  Later production runs removed these bugs/tricks.

BUG: Once you reach 100k, if you score drops back under 100k, you’ll earn a free ship for every rock or object you hit, until your score is over 100k again (video #1)!  The same thing happens when you roll the score counter at 1 million (video #2).  {Scott Stilphen}

• BUG: Sometimes when you shoot a large rock it will disappear instead of breaking apart (video #3).

• BUG: Occasionally your shots will pass right through a rock (photo #5 and video #4).

• BUG: When your ship is on the left side of the screen, you’ll see a flickering line beneath it whenever you shoot or an object reaches the ground (picture #4). 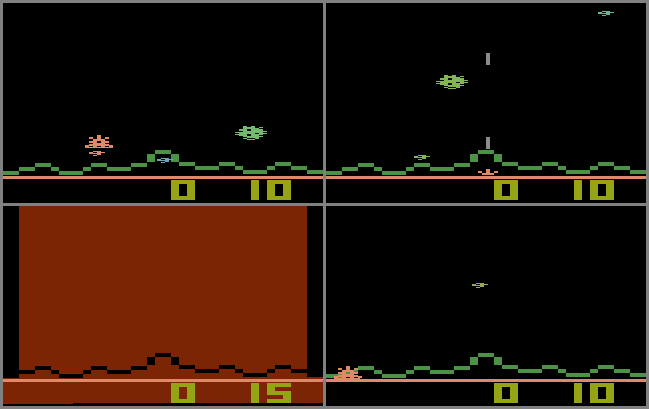 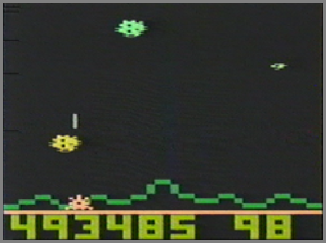