• EASTER EGG: The initials “BP AJM” (for Bob Polaro and Alan J. Murphy – see picture) are hidden in the game (both versions).  On screen 11, get shot while jumping to the right. {Mark Darmofal}

• The most extra lives you can have stored up is 32.  {Greg Degeneffe}

• The scoring info in the manual is wrong.  You can get anywhere from 0 to 80 each time you jump in a hole (not 10-70) and it’s not dependent on how fast you accomplish it but rather how many bullets Elmer has in his inventory (X 10).  So to get the maximum points for jumping in a hole, either jump in the hole before Elmer has a chance to get off a shot, or wait until he depletes his inventory and jump in the hole when he reaches his house and replenishes his bullets.  The manual mentions you can steal Elmer’s bullets but doesn’t mention how many points you get for doing it.  You get 100 each time if he has any (1 to 8).  The manual also doesn’t mention the bonus points you get for grabbing the flashing carrots.  When you steal his bullets, any remaining carrots will flash.  If you select one before it stops flashing, you get 250 points.  If you can select both in time, you get 500!

• It’s easy to roll the score (at 1 million) by continuously stealing Elmer’s bullets, especially on the slower screens. 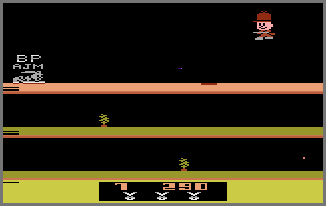