• It’s possible to jump the crevice (on the first screen) twice, from left-to-right.  It’s extremely hard, but it can be done. It’s also possible (and easier) to jump back right-to-left. {Scott Stilphen}

• BUG: When completing the jungle mountain screen, sometimes the music that plays during transitioning to the jungle river screen doesn’t play

• BUG: If you fall off the top ledge after finishing the jungle mountain screen (while it’s scrolling down – picture #2),  you won’t be able to jump on the jungle river screen, but you can walk onto the lily pads and ape heads – maybe even the center barriers (see video)?  {Scott Stilphen}

• BUG: Jump to the right from the spot shown in picture #3 and hold the joystick RIGHT - your character will stay “stuck” on the side of the mountain until you let go.  {Scott Stilphen}

• BUG: Collision detection is a bit off.  Coconuts often pass though you without harming you, or it may appear you’re not standing on something when you are (picture #4).

• BUG: With a few systems, the game may inexplicably RESET itself upon reaching the second screen.  {Markus Graf}

• BUG: If the score counter rolls over (at 1 million) when on or completing the jungle mountain screen, the normal music will briefly start playing (only the first note) and then transition to the game’s opening music (when you start a new game).  Also, the lives counter will reset back to 1, giving you a full compliment of reserve lives (either 3 or 5)!  {Garrett Holland}

• BUG: If the score counter rolls over (at 1 million) when on or completing the jungle river screen, instead of the score being shown, the top area will show the Sega copyright and all of the counters, as though you just turned it on, with the only differences being the level counter will show 0 (picture #5).  The lives counter will remain the same.  Also, when you get to the intermission screen, the framerate will become unstable.  When you start the next screen, the level counter will be reset to 1.  {Peter Nadalin} 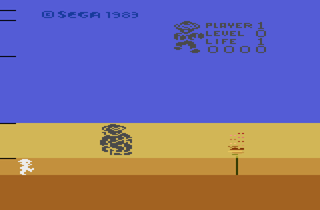