• EASTER EGG: A letter (supposedly from an “insider” at Atari.) appeared in the January 1984 issue of Electronic Games, page 8, (picture #11), which was the first known mention of any tricks for this game (the E.T. doll shown was made by Knickerbocker and was available through Atari’s VCS Owners Club Bulletin newsletter in the UK – Feb 24, 1983).  The letter hints at Jerome M. Domurat's initials appearing, as well as Indiana Jones.  Dave Harvey's column in the July 1984 issue of TV Gamer, July 1984, page 41, mentions 3 signatures, a hidden room, a picture of Indiana Jones' head, and a YAR.

• EASTER EGG: Collect all the phone pieces and give Elliot 7 pieces of candy.  Then, revive the flower.  It will change into a YAR and fly away (picture #1).  Repeat this for the next round and the flower will change into Indy (picture #2).  Repeat this a 3rd time and the initials “HSW3” (for Howard Scott Warshaw – the 3 denotes this is his 3rd game) will appear!  {Howard Scott Warshaw}.   Actually you don’t have to get all of the phone pieces for the trick to work.  You only need to collect the “H” piece for the YAR, the “S” for Indy, and the “W” for the initials.  There is also another (unplanned) method of revealing the initials (see ‘Candy’ section).

• EASTER EGG: The initials of the graphic artist, Jerome M. Domurat, are hidden in the game as well.  On game #1, give Elliot 1 candy.  Then, whenever you both are on the 8-pit screen, the letters “JD” will appear on the top status bar (picture #5).  {Ronnie Dingman and Thomas Jentzsch}

• Falling into a well (and hitting the bottom) costs exactly 269 units of energy; extending your neck uses 19 units.

• It’s impossible to exit the right side of the Landing Site screen, and the left side of the buildings screen, due to E.T. always being placed in contact with wells on the same pit screen.

• The manual states that Elliot can revive E.T. 3 times, plus one extra time every round (after reviving the flower) but it fails to mention being able to carry over 1 unused revive in reserve from any previous round. The following method proves this - Round 1: Get E.T. “killed” 3 times.  Revive the flower and then end the round.  Round 2: You get one revive, plus one more if you revive the flower.  This gives you a total of 5 revives (instead of 4) over 2 rounds. It's also possible to rollover this revive variable.  If you accumulate 128 revives (or lives), this variable will rollover to 0 and Elliot won't be able to revive E.T. if you run out of energy. {Scott Stilphen}

• When E.T. calls the spaceship, all the humans (Elliot, the scientist, and the FBI agent) return to their respective buildings.

• Hold down SELECT and the FIRE button to hear a slow version of the theme music, along with a “techno” rhythm beat!  {Tony Roy}

You also start every game with 3 points.  If you start a game and then press SELECT (or finish round 1), you’ll see “3” as your score (if you turn the game on and press SELECT, you’ll see “0”).  Also, the first time you complete a level, notice that a “3” is first shown, before being added to your score.  Is this a bug, or was it done intentionally (as another reminder of being Warshaw's 3rd game)?  The “tally” screen works by 1. First showing your previous score, 2. Adding your remaining energy, 3. Adding the total points for carrying any candy pieces onto the ship (490 x # of candies), and 4. Adding 770 points for every candy given to Elliot.  {Scott Stilphen}

• BUG: Candy – The candies appear at 17 second intervals (the formula in the code is 16*64/60).  On rare occasions a round will offer more than 31 candy pieces.  If you collect more than the 31 (which the manual says isn’t possible) the programmer’s initials will appear in the score counter, along with some strange graphic symbols, in the following round.  E.T. will also turn black (video #1).  {Jeff Adkins}  Note- this wasn’t Warshaw’s planned method to revealing his initials!  The flags that show which well screens currently have candy is never cleared and the counter that tracks how much additional candy can be found during the round often doesn't reach zero, creating a potential +4 or -3 to the amount of candy than can appear during a round. David Richardson has more information about this bug on his website: http://www.neocomputer.org/projects/et/

• BUG: Forgetful Elliot – On games 1 and 2, Elliot may forget to give you the last piece, unless you call him again.  On all games, the following trick will make Elliot “hide” the last piece - first make sure you don’t have all the phone pieces, and you have at least one revive left.  Get 9 candies and call Elliot.  Stand near a pit and wait for him to appear.  When he takes the candies, fall into the pit, getting killed (your energy must be low enough).  When Elliot revives you, levitate out of the pit.  Elliot will keep the phone piece he’s supposed to give you, and you have to call him again to get it since it won’t be in any of the pits. {Scott Stilphen}

• BUG: Landing pad – (1) The Left Difficulty switch (which is supposed to determine the landing conditions with Elliot) doesn’t work.  Elliot can’t be present when the spaceship arrives, regardless of the setting.  The ship will always crash down on Elliot, locking up the game (picture #6). (2) Extend E.T.'s head just as the mother ship arrives. E.T. will be too tall and his feet will stick out the bottom of the ship as it flies away (picture #7).  The head-raising ‘sound’ will also continue to play until the ship drops you off. {Russ Perry Jr.} (3) If you move just as the ship arrives, one of your legs will appear to be cut off (picture #8).

• BUG: Pits – (1) When E.T. falls into a pit, press the FIRE button just as his feet touch the bottom.  If timed right, his feet and sometimes part of his body will be stuck in the ground (picture #9). Press the button again to get him out. (2) On the screen with 5 pits, go to one of the two left-most pits and fall in.  Levitate out and center E.T. over the pit and push LEFT.  Before appearing on the adjacent screen you’ll first appear on the other side of the first screen.  (3) Let. E.T. run out of energy while levitating out of a pit.  He’ll die in mid-air and fall back to the ground like a rock.  (4) When E.T. dies in a well, his body will float above the ground. {Scott Stilphen}

• BUG: Flower power – (1) If E.T. dies while reviving either a live or dead flower, his body will float higher (than usual) above the ground.  When Elliot revives him, he’ll still remain in the air (picture #10)! {Russ Perry Jr.}  (2) If E.T. dies while reviving a live flower, sometimes Elliot will not show and it appears as though E.T. “eats” the flower (it disappears). {Scott Stilphen}

• FRYING: Fry until E.T. falls in a well, then press SELECT and game "0" will appear (video #2). Notice that the numbers are in black.  None of the power zones are present, except for a few 'call Elliot' zones (who is not in game 0). {Terence Micharoni} 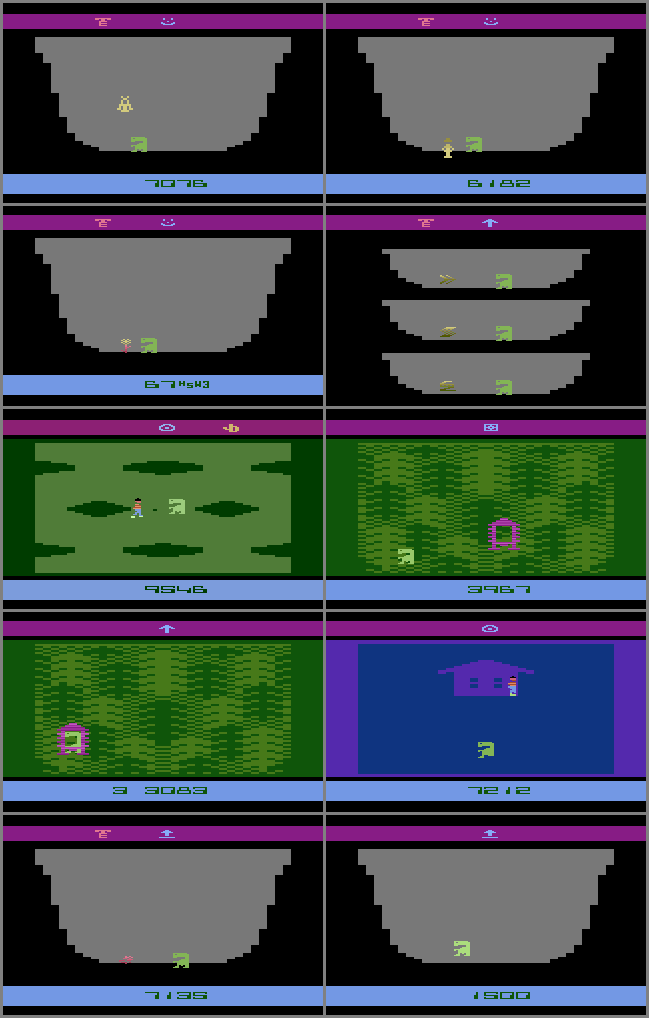