• EASTER EGG: Have the TV Type switch on B&W. During a game you need to be at the top of the screen when the timer is at 40 seconds. At that moment, hit SELECT and you'll turn into the letters "JT" (for Jane Terjung) and all the Thirsties will turn into "ST" (for Stephen Tatsumi – picture #1). If you turn into Kool-Aid Man, you'll be a large "JT" (but when you bump into something, you're still an upside-down pitcher). There seems to be no way to turn things back to normal w/o starting a new game (note- it's very hard to play in this state, since it's tough to see the "power-ups" as quickly).

• BUG: If the game is turned on with the pause mode on (Left Difficulty A), it will lock up (picture #2).  Putting the switch to B will then start it. {BSR}

• BUG: Due to bit of unorthodox programming (modifying more than 1 object positioning registers within 24 cycles after an HMOVE command), the score won’t be shown properly in later consoles that have a slightly modified TIA chip (a few NTSC JRs and most PAL JRs, and all PAL 7800s).  This causes some of the digits to overlap each other, triggering a collision register and causing your character to continually bounce back-and-forth in the upper-left corner (pictures #3 and #4).  {Eckhard Stolberg}

• BUG: A green Thirsty will flash briefly in the top left corner of the screen, usually when you eliminate the last one. {BSR} 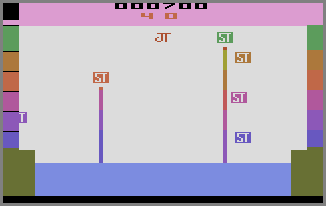 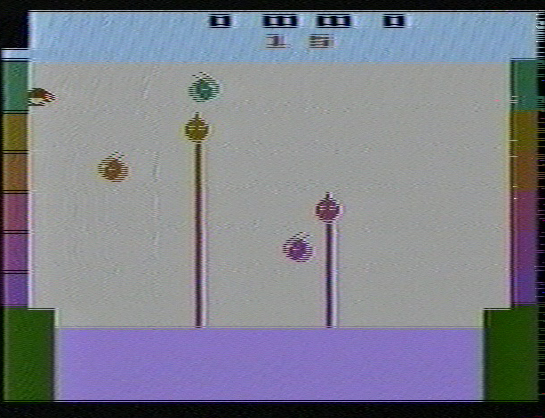