• 2 versions exist. The version sold by Atariage was modified to be easier to play.

• As part of a contest by Ebivision, the first person to reach the final (9th) level and describe what appeared would win a new (unreleased) game from them.  It’s unknown if anyone claimed the prize, but here’s what the final screen looks like (picture #1).  {Scott Stilphen} 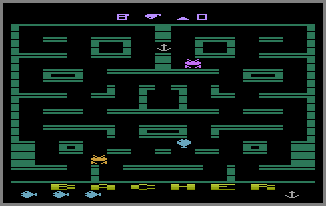