• EASTER EGG: Steve Woita revealed/confirmed that there is a way to change “CRAZED WAVE” to “WOITA WAVE” (see picture) but he doesn’t recall how to do it.

• BUG: Just before the title of each level is shown, there are 2 rows of numbers in its place (level 1 flashes 111111,000000).  This is because the 6-character kernel for the score is used for the level name text “graphics”, and one frame of the previous score in the kernel was left in. {Steve Woita and Scott Stilphen} 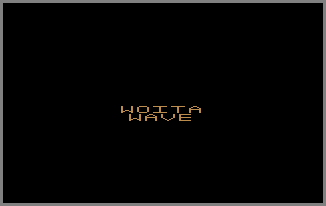