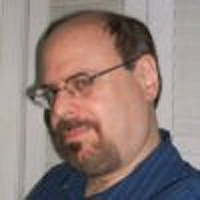 Dan Persons was a reviewer for Video Games magazine back in the early 1980s.  He later wrote for Family Computing magazine.  Dan was kind enough to talk about his experiences with us.

Dan Persons: I have a BFA from NYU, School of Film and Television, back when dinosaurs ruled the Earth (i.e, 16mm, flatbeds, splicing blocks ... how we managed to make films before digital is beyond me).

Dan Persons: I flirted with writing in my early 20's, but only went pro when I started reviewing for Video Games.  I'd like to say I was inspired by Hemingway or Woodward and Bernstein, but, frankly, it was because I had a 2600 and said to myself, "You know what would make this better?  If I didn't have to pay for the cartridges."  And, hey, Video Games was right there in the Empire State Building, so it all made sense.

Dan Persons: Well, you've got all the issues, so you know better than I.  First time my name shows up in the masthead is for the August 1983 issue, and that's for my review of Escape from the MindMaster, which was the piece I wrote on spec for them to demonstrate my chops.  I may have gone all the way to the final issue, but I don't remember.  My name is on the masthead for the penultimate issue, so I was at least there that long.

Writing for them was my first published work as a professional writer, and I approached the magazine because I felt their approach to covering video gaming reflected a more journalistic attitude than other magazines being published at the time.  It was both balanced and eclectic over its entire printing life - something most other magazines of the time could only aspire to.  Video Games was balanced.  It covered the games of the day as well as the newsmakers.  It added some nice touches like the amusing The Video Kid comic.  You might also find an article on pinball or a fictional short story, but their best work was saved for looking at the bigger picture.  Prime examples include a discussion with four experts on the potential harm caused by video games and interviews with folks working behind the scenes in the video game industry. 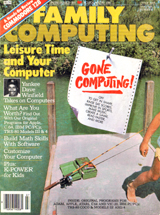 Dan Persons: That, I don't particularly remember.  I believe I went to them after Video Games, so likely late '84/early '85.  I hung on long enough for the title change (Home and Office Computing, I think it was), but not much longer than that.

Dan Persons: I've never been to any electronics industry shows.  For the ones that were out of town, none of the magazines I worked for would foot my travel to 'em.  As for Toy Fair, although it was local, I never got to it.

Q: After writing for Video Games and Family Computing, did you stay in the same field (writing)?/

Dan Persons: Writing for Video Games put the bug in me.  I started out as a reviewer and went on to become a full-fledged journalist.  My first articles were published during the waning days of VG; I was a regular contributor to Disney Magazine (focused on adult Disneyphiles), covering the Disney theme parks.  Online, my interviews and articles have appeared on the IFC and ReelzChannel websites, among others.  My longest association is my ongoing relationship with the vanguard science fiction/horror/fantasy film magazine, Cinefantastique, including a brief stint as editor.  My focus these days is more on media; presently I produce several podcasts for Fourth Castle Micromedia, the owners of CFQ.  I've had a number of short stories published, most prominently in the Marvel anthology, The Ultimate Silver Surfer.

Q: Do you still own any issues of the magazines you wrote for, either as a keepsake, or to show friends or family?

Dan Persons: I probably have some stashed away in storage.  I tend to focus more on the present than my past output.

Q: Former Electronic Fun with Computers & Games writer Dan Gutman mentioned he wasn’t much of a fan of video games, and viewed writing for such magazines as just a stepping stone for his career.  Did you feel the same way, or did you really enjoy playing them (and if so, what types of games did you prefer)?

Dan Persons: The whole motivation for writing was that I really enjoyed playing video games and wanted to find a way to get an inside connection to the industry's cutting edge.  The people over at Video Games, bless 'em, were more than willing to humor me in that ambition.  That they paid me to do it was a bonus.

Dan Persons: I'm not sure how much my opinion counts.  Much as I loved playing the games and writing about them, film was more where my interests resided.  Once I moved into that field, I didn't really look back.  The irony is that I was always looking forward to seeing how, as the technology grew in power, narrative would be incorporated into the field, and now that that is a given, I can't really invest the hours needed to explore these works.

The other thing for me is that one of the appeals for me of the early games was their sense of stylization, however mandated by the limits of te

chnology they may have been.  For example, how elegant was Night Driver, to conjure up the impression of a road purely through moving blocks of light?  The photo-realistic games that are possible now are impressive, but they suffer something from the Uncanny Valley syndrome - I can look out the window and see a real reality; why do I need this almost-reality?  That said, I haven't played games like BioShock, whose look and concept I find very intriguing, and I was pretty beguiled by the wryly ominous world of Portal, which was probably the latest title I've played, so it may not take much to change my mind.

As far as journalism is concerned, I'm an old-fashioned boy, so a part of me still feels we lose something in giving up a medium as tangible as the printed page.  But there's also something exciting about the digital frontier (and that's the right word for it.  It's still pretty much the Wild West out here).  It offers the ability to incorporate different media based on the needs of the story, and the accessibility of technology that allows a journalist to switch hats as writer, photographer, and filmmaker; it certainly the promise of a larger, worldwide audience.  Less exciting is the lack of ways to actually make a living off the field.  I'm still hoping that a solution for that will be found, soon.

In terms of video games, it only makes sense for the genre to be covered in a way that can take advantage of its dynamic, visual nature, with the added bonus of allowing the audience to bring their own voices into the mix.  Printed media may or may not rise again (I'm suspecting not), but I see no reason why coverage of the field shouldn't continue its move to digital.

Q: I've been watching some of your recent prototype cartridge auctions, which are being managed by Joe Cody of Atari2600.com.  You had a very impressive collection.  The last time I saw a similar collection was when the former Electronic Games founders (Arnie Katz and Bill Kunkel) sold off their collection.  I wish I had known about yours beforehand, as I would have loved to archive those to see if you had any earlier/alternate versions of the games.  I also noticed several of the auctions were taken down.  I'm guessing someone made you an offer for most of them (probably Jose Artiles.  He's the most well-known collector of Atari VCS/2600 cartridges for the past several years, and is planning on opening a video gaming museum).

Dan Persons: Those cartridges were acquired in my role as game reviewer for Video Games magazine.  All of the Atari 2600 loaner/prototype cartridges would certainly have been received pre-release, so figure sometime around '82/'83.  In most cases, they'd be given to me by my editor, Roger Sharpe.  It's worth noting, though, that he was previously the editor of a gaming industry magazine (I think it was Play Meter), so he likely had connections that way.  I would occasionally receive Atari 2600 review cartridges directly by mail.  I don't recall at any point that they were unsolicited, and were usually arranged through the magazine.  Whether the carts given me by the magazine were received unsolicited, I don't know.  I don't think I ever requested a game specifically.

Once my collection passed over to Joe Cody, I was done with it.  Joe did mention that a number of prototype carts went to the owner of the largest private collection of 2600 games in the U.S; maybe that's Artiles?  Some also went overseas.  That's about all I know.

Q: Have you stayed in touch with any of your former co-workers from either magazine?