In 1975, Ron Milner and Steve Mayer of Cyan Engineering developed the first prototype of what became the Atari VCS.  Joe Decuir was hired later that year to help with debugging the prototype and to help with building the first gate-level prototype.  The following year, Decuir apprenticed for famed IC designer Jay Miner, who was brought on to be the lead chip designer and who created the TIA chip (Atari purchased Cyan Engineering at this point, and renamed it Grass Valley Research Center).  Miner later designed the ANTIC and CTIA/GTIA chips that were the heart of Atari's 400/800 computers and subsequent variations, and the Commodore Amiga computers - the true successor to the 400/800.

This FAQ is primarily about the TIA chip, and all the various manufacturers of it and the variations that were produced. 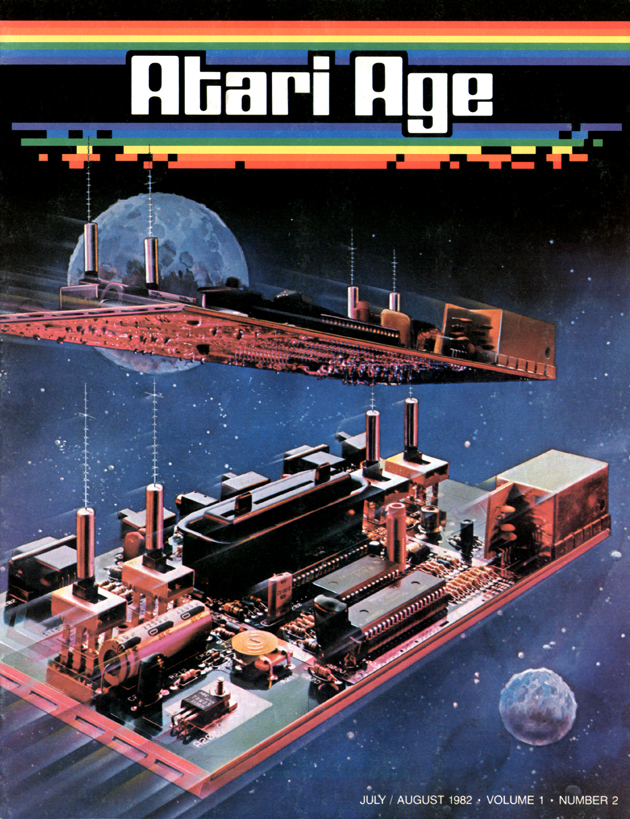 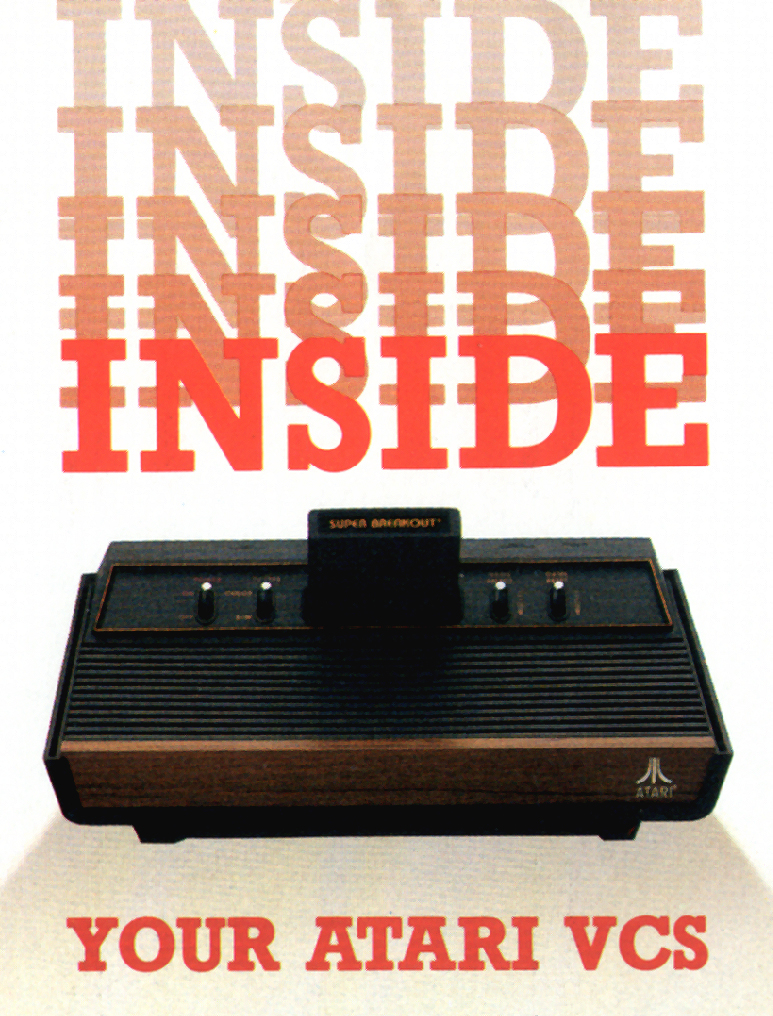 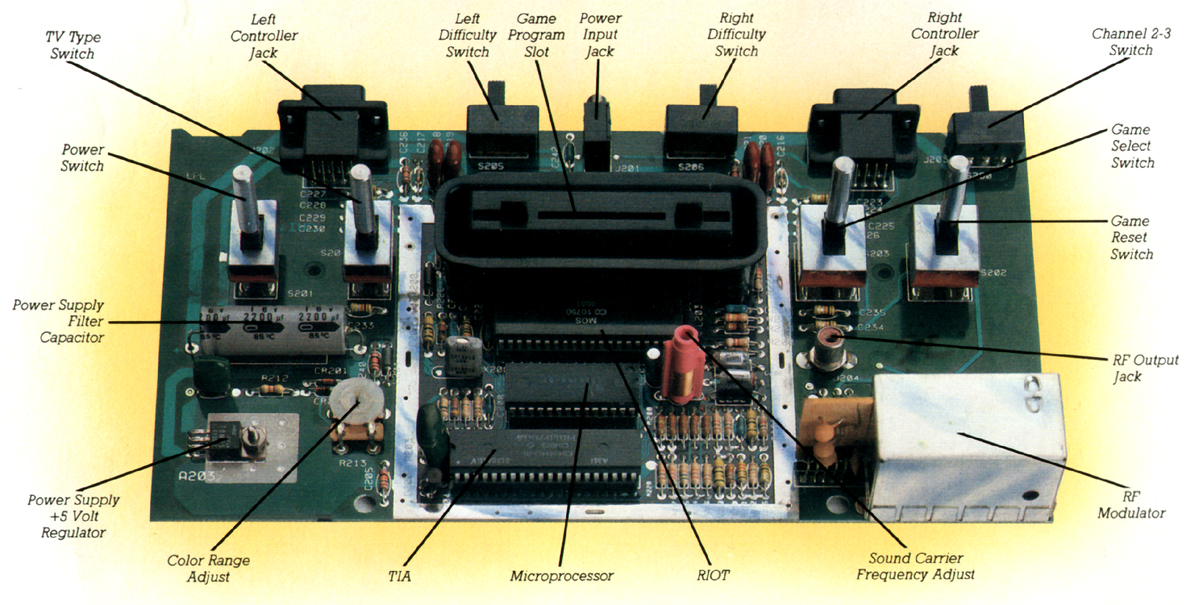 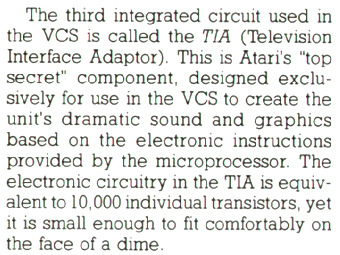 Version 3 has an issue with Wall Ball, and may either show 2 or 3 sprites *.

Version 4 has a slight issue with starfield in Cosmic Ark and Journey Escape, and may either show 2 or 3 sprites *.

Version 5a has an issue with Ebivision's Pac-Man and Pesco, and may either show 2 or 3 sprites *.

Version 5b has an issue with Ebivision's Pac-Man and Pesco, and may either show 2 or 3 sprites *. Also has a slight issue with Cosmic Ark's starfield.

Version 6 has the score counter issue with Kool-Aid Man, Thunderground (Anteater is still unreleased, but should exhibit same issue), the issue with Ebivision's Pac-Man and Pesco, the issue with Cosmic Ark's starfield (PIC), and shows 3 sprites *.

Version 7 has an issue with Kool-Aid Man, Ebivision's Pac-Man, and Pesco, and Pitfall II: Lost Caverns. This exists in NTSC 2600 "JR" systems that feature a 1-chip pcb.  The "JR" system was originally designed to incorporate a new 3-in-1 chip called "JAN" - short for Janice - which combined the CPU, TIA, and RIOT chipset). The chip is dated 1987 Atari but has no manufacturer info, and only has mono sound output! The pcb is marked "Rev 4" and there's no date or "ACTION" name on it:

Version 8 was used in most PAL JRs and all PAL 7800s that reveals a problem with PAL Centipede and the 1987 re-release of Millipede.  Using the Activision work-around method of avoiding the HMOVE lines doesn’t work on some PAL 2600 JR (all-black) models.  Also, like the 3-in-1 2600 JR chip, the TIA chip in PAL versions of the VCS only have mono sound output.  According to Joe Decuir, the PAL version of TIA was called PAULA.

Version 9 has an issue with Frogger II: Threeedeep! and is found in certain 7800 systems.

There's also all the 3rd-party systems and adapters, which often used bootleg TIAs (a few are listed here).

Once the list is more complete, the information could be incorporated into an emulator like Stella, as well as help homebrew programmers to make sure any tricks they use would be compatible across every variation. If you have any information to add, please email me.

These are the games known to have issues with certain TIA chips:

*2 or 3 - a test program written by Eckhard Stolberg that was posted on Stellalist. The program shows either 2 or 3 columns of sprites, depending on what TIA is used. This denotes a slight difference between the 2 most-common TIA versions, although neither is a clear indication of any known incompatibility issues with any games.  The differences could also be attributed to temperature issues with the TIA chip itself, as shown in this video.
Anteater - still unreleased, but should exhibit same issues as Kool-Aid Man and Thunderground.
BMX Airmaster - incompatible with some original “heavy sixer” 6-switch VCS models (yet to verify). The right edge of the half-pipe may not be highlighted.
Boulder Dash - since the game uses the same code from Cosmic Ark to generate the starfield on the title screen, all the same issues apply with this game (PIC).
Centipede - issue with the title screen (PIC).  This only happens with the NTSC version.  Note: the starfield is the result of a bug in the TIA chip (INFO)
Cosmic Ark - the starfield may either have more stars (V1 PIC), a single vertical column of stars (V2 PIC), or elongated stars (V3 PIC).  The starfield pattern is the result of two different clock timings beating against each other (INFO).
Frogger II: Threeedeep! - (yet to verify).
G.I. Joe: Cobra Strike - issue with the Cobra's head that may look similar to this (PIC).
Halo 2600 - issue with the 1-chip NTSC 2600 "JR" variant that may cause the starfield on the title screen to disappear.
Harmony - issue with Escape from the Mindmaster and certain TIAs (INFO).
Journey Escape - issues with starfield (same as Cosmic Ark).
Kool-Aid Man - issue with score counter (INFO).
Masters of the Universe: The Power of He-Man - issues with title screen graphics (V1 PICS) (V2 PICS).
Pac-Man (Ebivision) - issue with stray dots (INFO).
Pesco - issue with stray dots (INFO).
Pitfall II: Lost Caverns - issue with the 1-chip NTSC 2600 "JR" variant. The game doesn't do an HMOVE in every line, so not all lines start with an eight pixel blank. The program tries to hide it with displaying a black eight pixel wide copy of missile 1 in those lines where it doesn't do an HMOVE, but with this system, these missiles are shifted one pixel to the right (VIDEO). If you run Pitfall II in Stella and disable missile 1 with ALT-V, you can see what this looks like.  There's a small glitch where stray pixels or a line appears next to Pitfall Harry's head with some 7800 models (PICS).
Polaris - the PAL version has an issue with some PAL consoles (PICS).
Pursuit of the Pink Panther - still unreleased, but apparently has an issue displaying the Inspector Clouseau character with Gemini consoles.
Spider Fighter - issues with the score counter and copyright info with some NTSC 2600 "JR" and PAL consoles (PICS).
Stay Frosty - issues with the starfield (same as Cosmic Ark V1) (INFO).
Thunderground - issue with score counter (INFO).
Wall Ball - incompatible with certain TIAs (INFO).


Below is the current master list of TIA chips:

These sites lists the logos of the more well-known chip manufacturers:

Where to buy replacement TIAs?  Best Electronics sells CO10444Ds for $19.95 each, or PAL CO11903s for $11.50 each.  Be wary of sellers such as Arcadeshop and Ebay seller "wehavethatitem" who sell counterfeit CO10444_8408s. Their chips look nothing like any listed on this page and don't even have a chip manufacturer logo on them.